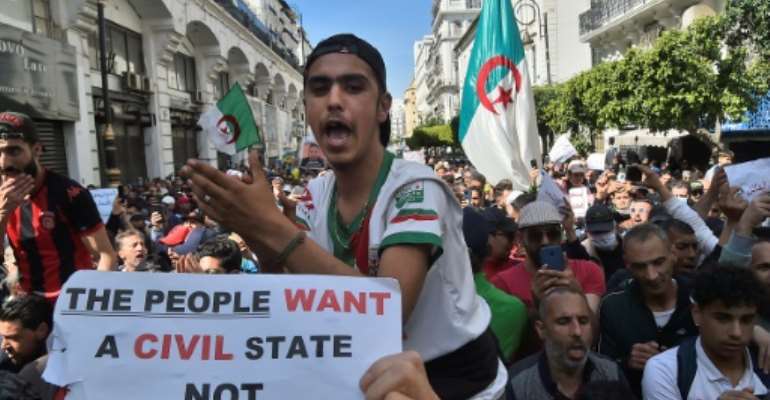 Algerian anti-government protesters take to the streets in the capital Algiers as the Hirak pro-democracy movement keeps up its weekly protesters. By RYAD KRAMDI (AFP)

Pro-democracy protesters took to the streets in Algeria Friday, with authorities making arrests in the capital and dispersing demonstrators in other cities, a rights group and a journalist said.

In Algiers, where thousands took part in the weekly Hirak protest movement demonstration, authorities arrested activist and poet Mohamed Tadjadit and three students at the end of the protest, the CNLD prisoners' rights group said.

Protesters chanted slogans against those in power and the army, a pillar of the regime, and criticised President Abdelmadjid Tebboune's decision to call early elections for June 12 in response to the country's socio-economic crisis.

"No elections with the gang (in power)," protesters chanted in Algiers.

The Hirak protest movement was sparked in February 2019 over then-president Abdelaziz Bouteflika's bid for a fifth term in office.

The ailing strongman was forced to step down weeks later, but the Hirak continued with demonstrations, demanding a sweeping overhaul of a ruling system in place since Algeria's independence from France in 1962.

Since the movement's second anniversary on February 22, thousands have continued to defy a ban on gatherings due to the coronavirus pandemic and taken to the streets for weekly protests, which were suspended for almost a year due to the health crisis.