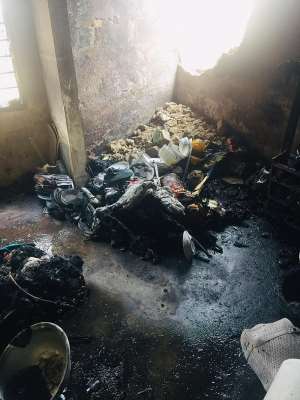 A family of four is homeless following a Tuesday afternoon fire outbreak which razed down their two-bedroom apartment at Pankronu Estate, near A-Line in Kumasi.

Currently counting their losses, the family is grieving for the intervention of the National Disaster Management Organisation (NADMO) and the support of the general public to get onto their feet again.

While the cause of the fire is still under investigation, Maame Kaakyire, the mother in her 50s narrated that she was performing domestic activities outside the apartment with her little granddaughter when she heard an explosion in their bedroom.

"The only thing we use in the bedroom is the bulb light and a sacket that charges only phones".

The incident occurred about 3pm but when fire service personnel arrived after 30mins, it took them about 1hour to quench the fire.

The family recounts losing everything in the apartment to the fire including home appliances and undisclosed amounts of monies from the mother, her daughter and her grandson.

The mother, the breadwinner of the family is a trader who said they have perched by a neighbour in an adjourning apartment the fore fire service personnel were quick to prevent the fire from extending into.

The family has nothing more of their own to wear or to eat and calls on the general public to come to their aid.

According to them no official of NADMO nor assembly member of the area has visited the scene over 24hrs after the incident occurred.

NADMO is mandated by law to bring relief to disaster victims and the family is expecting to benefit from the government institution.