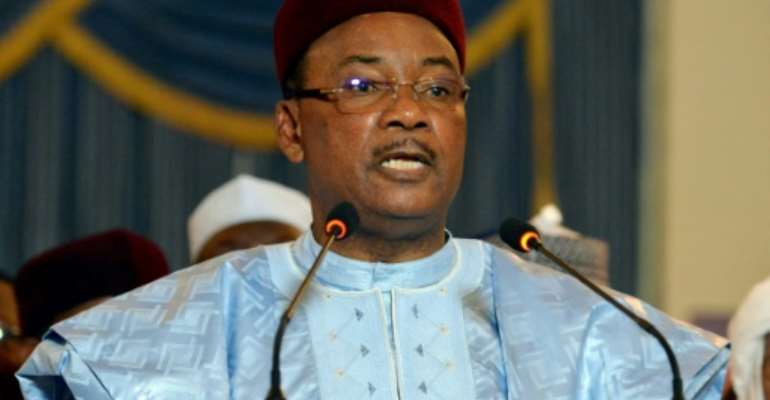 Issoufou has won plaudits in Europe for stepping down voluntarily after two terms in office. By ISSOUF SANOGO (AFP)

Mahamadou Issoufou, who is stepping down as president of coup-prone Niger after two terms in office, on Monday won Africa's top prize for leadership.

He was awarded the 2020 Ibrahim Prize for facing "seemingly insurmountable challenges," ranging from deep poverty to jihadism and desertification.

Despite these enduring problems, "Issoufou has led his people on a path of progress", said a statement by award committee chairman Festus Mogae, who is also former president of Botswana.

"Today, the number of Nigeriens living below the poverty line has fallen to 40 percent, from 48 percent a decade ago," the statement said.

"While challenges remain, Issoufou has kept his promises to the Nigerien people and paved the way for a better future."

Issoufou, 68, is stepping down next month after 10 years in office.

His decision to quit after two terms has enabled Niger to have the first democratic transition between elected leaders since it became independent from France more than 60 years ago.

The handover has been contrasted with that of other countries in West Africa, where presidents have overseen constitutional changes enabling them to extend their time in office -- often at the cost of violent protests.

Issoufou's preferred successor and right-hand man, Mohamed Bazoum, won last month's runoff, although the results were contested by the opposition and violence in the capital Niamey claimed two lives.

The Ibrahim Prize for Achievement in African Leadership is based on principles of sound government, respect for term limits and democratic elections.

It has been handed out by a foundation, set up by British-Sudanese telecoms tycoon Mo Ibrahim, since 2007.

Issoufou is the sixth recipient -- the prize has not been awarded in some years because of a lack of a suitable winner.

In a statement on Twitter, Issoufou thanked the Mo Ibrahim Foundation, and said he considered the award an "encouragement to continue to think and act to promote democratic values and good governance, not only in Niger but also in Africa and throughout the world".

Niger is the world's poorest nation, according to the UN's benchmark of human development, and is struggling with soaring population growth.

It is also fighting two jihadist insurgencies that have forced hundreds of thousands to flee their homes.