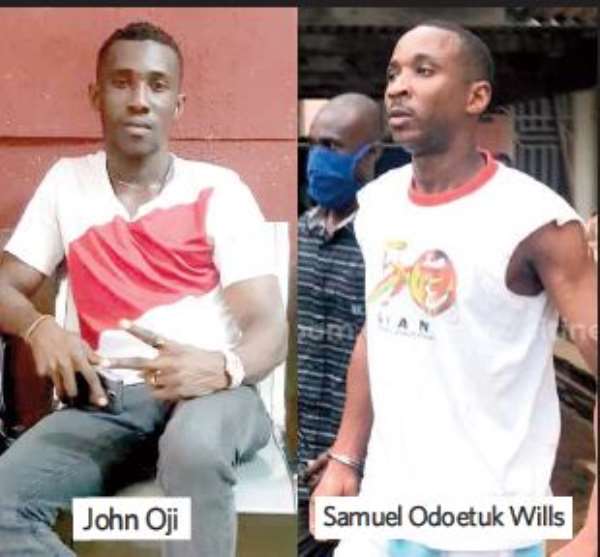 The lawyers for the two Nigerians accused of the kidnapping and murdering of four girls in Takoradi in the Western Region failed to be in court yesterday to give their oral addresses prior to the final judgment of the case on Friday.

The two Nigerians are Samuel Udoetuk Wills and John Oji.

However, their defence lawyers, George Essilfu-Ansah and Mark Bosia of the Legal Aid representing Udoetuk Wills and Oji respectively were conspicuously missing in court yesterday.

The prosecutor and a State Attorney, Patience Klinogo was however present and ready to give her address.

It would be recalled that at the last court sitting, the court set March 5, 2021 as the 'judgment' day, after the counsel for the two accused persons respectively closed their defence.

The court indicated that prior to the final ruling, the prosecution and the lawyers for the accused persons would have to give both written and oral addresses.

The prosecution was to file their written address on February 17, 2021 while the defence lawyers were to submit their addresses on February 24, 2021.

The court then set yesterday, March 3, 2021 to hear the oral addresses to enable the jury to give a verdict.

However, the two defence lawyers were absent in court when the case was called and no reasons were given for their absence.

Meanwhile, the trial judge, Justice Richard Adjei-Frimpong, disclosed that the two defence lawyers failed to file their written addresses by the stipulated date of February, 24, 2021.

He said because of the seriousness of the case, he had to give the defence lawyers another opportunity to address the court and so he adjourned the case to today.

Giving his order, the trial judge said at the last court siting both the prosecution and defence lawyers were given the dates to file their written addresses and do oral address yesterday.

“But when the case was called, the defence lawyers were strangely absent. There were no explanations as to why the two were absent,” the judge explained.

He said the State Attorney in the case indicated that she sent an SMS to the defence lawyers as she usually did when the case was coming on, but none of them responded.

He said the accused persons were also not able to tell why their lawyers were not in court.

“Already, I have fixed the matter for summing up to the jury on Friday, March 5, 2021 for the jury to declare its verdict on the same day and this remains unchanged,” the judge added.

He said however, that Section 273 Acts 3 of the Criminal Procedure code indicates that addresses do not appear mandatory, saying, “I shall adjourn the case to March 4, 2021 to allow the defence lawyers and the prosecution to address the court.”

Samuel Udoetuk Wills and John Oji, both Nigerians, are being tried in connection with the missing girls which has generated heated public debate for about two years.

The victims—Ruth Quayson, Priscilla Blessing Bentum, Priscilla Koranchie and Ruth Abekah—were believed to have been kidnapped between August 2018 and January 2019, and the police subsequently said some skeletal remains they found in Takoradi were that of the girls.