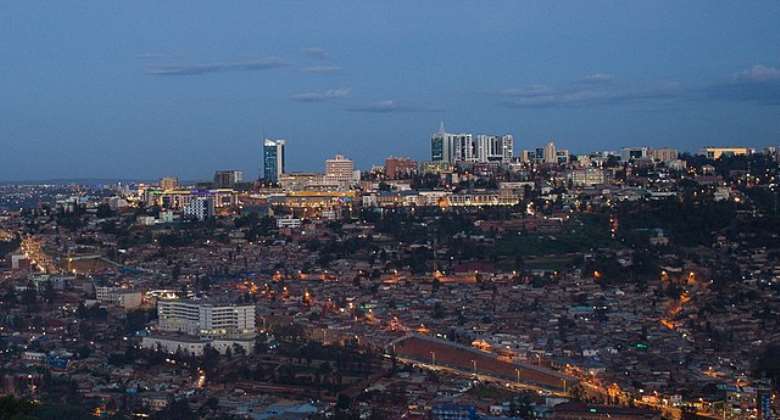 For many years in contemporary Africa, the Rwandan capital Kigali, has been adjudged the cleanest urban enclave on the continent; and the strategy is simple:

Plastic bags, packs and it's associate products are banned. So upon arrival at Kigali airport, your luggages are checked to remove every plastic package and given paper packs.

All items bought at grocery and every other shops are packed in paper bags because there no plastics in Rwanda. Kigali has no open drains and their roads are not asphaltic but tarmacked, which is much enhanced.

Even in the countryside where the roads are not tarred, the surfaces are prepared in a way that it really feels like driving on asphaltic roads. It's a form of road engineering method being applied in that country.

In Kigali, there are fully armed police officers, with fingers on triggers, at every traffic intersection. These officers are wired, communication-wise, to central command center.

Motorists are regularly pulled over for checks, and nobody dares argue or attempt to offer bribe to a police officer since that will put you in a terrible jeopardy.

At every corner of the city of Kigali, are fully armed military personnel in combat gear with fingers on triggers. These officers are present, everyday of the year; visible and ready to deal with any unforeseen threat.

In all, the people of Rwanda, to some extent, have chosen sacrifice for national good, over parochial interests.

And as a result, their country that was nearly wiped off the map following the 1994 genocide, is now the Geneva of Africa, by way of impeccability of aerial photogenics, architectural aesthetics and environmental spotlessness.

In Kigali, one can walk for many kilometres without sweat, because designated pedestrian walkways lined with beautifully manicured trees are everywhere.

There are commercial motorbikes in Kigali but they have designated stations and riders are always in branded aprons, particularly tigo network. Nobody, either dare ride without wearing a safety helmet or, riding through red lights at intersections because the repercussion is swift and ruthless.

Indeed, Rwanda has radio and television stations, with a vibrant press. But their behaviour, unlike what pertains in Ghana, is, primarily, dictated by the larger Rwandan agenda, and not misguided parochial interests which are often hidden behind a farçade of Think Tanks manned by self-acclaimed experts in archaeology to zoology.

For example, about a month ago, Rwanda was recording 150 cases of covid-19 infections daily, and to tackle the problem, a 2-week nationwide lockdown was put in place just before midnight, to take effect the following minutes. There was no notice but the people complied, and rate of daily infection dropped drastically.

About the same time, Ghana was recording over 700 cases of covid-19 infections daily, but while some people called for a lockdown, others were vociferous in their opposition to the idea. Practically, Ghanaian governments are always dictated to by the people's whims and caprices.

On the issue of motorbikes as means of transport: the political party which, through legislation, actually banned the enterprise, made a dramatic u-turn to legalise same, if voted for in the 2020 elections. And those in the illegal business were salivating because they claim the police are always harassing them.

These motorbike riders with no license to operate, and also, always breaking road traffic regulations by jumping red lights at traffic intersections, were rather emboldened by objectionably shameless duplicity of a person seeking to occupy the highest office of the land.

When it comes to security, the all-knowing konkonte experts in Ghana are always claiming the military have no role to play in internal matters because that can increase their appetite for coups.

By this logic, therefore, the State will have no business deploying the military, even when we are confronted with a domestic terrorism. And such an argument is what I fittingly term as "TWISTED, CONTORTED AND CORRUGATED intellectual exposition on matters of security".

There are Civil Society Organizations, Policy Think Tanks and Experts in various policy alternatives, but, they don't oppose government initiatives and decisions taken in the interest of the larger Rwandan society.

But in Ghana, when covid-19 infection cases are shooting through the roof, a section of the media will provide oxygen for their handpicked assigns masquerading as experts, to oppose a lockdown, while others gather theirs to call for same.

When Ghana first went into a lockdown in parts of the country, these very media houses were sharply divided over whether the decision should have taken immediate effect, or, those in the affected areas given one month notice to prepare.

Under lockdown, meals were provided to the vulnerable. And here too, there were debates over why the rations were not being prepared from the Kempinski Gold Coast Hotel, but rather by ordinary Ghanaian caterers.

Recently, the Supreme Court of the land has found it necessary to issue a statement admonishing the general public not to engage in pronouncements that, potentially, expose them to public hate. And as expected, the media and their all-knowing assigns, are up in arms.

In Ghana, once blockheaded vagabonds get the chance to sit in the studio of radio/TV with a microphone in front of them, they, instantaneously, fall into a debilitating psychopathic trance, and see themselves as being on the same pedestal as Socrates and Aristotles of this world,

The Rwandan example of having armed police and military stationed at every traffic intersection and vantage points throughout the city of Kigali, respectively; and is keeping their city clean, safe and orderly; certainly cannot be implemented by any Ghanaian President because the media will provide platforms for 'konkonte' experts to shoot it down.

Democracy to the Ghanaian

We have always hailed the exploits of Cpl Salifu Amankwah, in the 80s, when we talk about cleanliness and orderliness at the Kwame Nkrumah Circle, where brute force and instant justice was his modus operandi.

This clearly cements the fact that Ghanaians abuse freedom and rather respect a dint of high-handedness of political leadership.

Effectively, Democracy, in the lexicon of the typical Ghanaian, means "I am free to do whatever I want with no State interference, but I have every justification to blame government for the repercussions of my irresponsible behaviour".

Consequently, what the typical Ghanaian needs in order to be responsible, is a Democratic environment where the laws are ruthless; and punishments are swift!!!