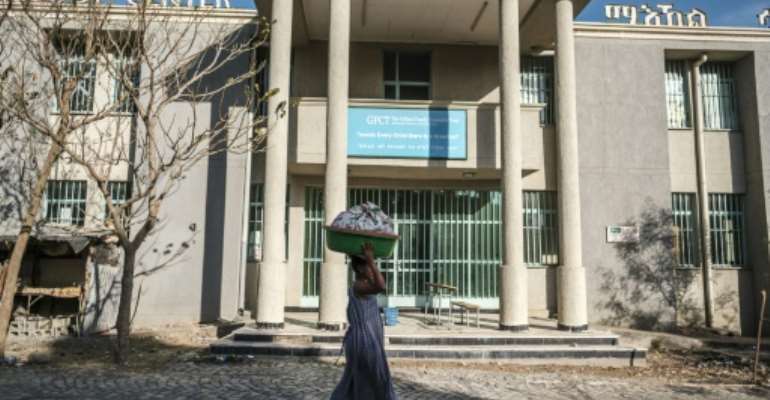 A displaced person from Western Tigray walks with a tray on her head in the school where she is sheltering in Tigray's capital Mekele on February 24, 2021. By EDUARDO SOTERAS (AFP)

For nearly two decades, the hilltop museum flanked by weeping willow trees showcased the military might of the Tigray region's ruling party, which dominated Ethiopian politics for decades.

Located in the regional capital Mekele, the Tigray Martyrs' Monument housed weaponry and battle plans from the party's early days as a guerrilla movement, along with sepia portraits of men and women who lost their lives during its rise to power.

These days the museum symbolises how far the party, the Tigray People's Liberation Front (TPLF), has fallen after Ethiopian Prime Minister Abiy Ahmed deployed troops and warplanes to oust it late last year.

With pro-TPLF fighters long gone, Kalashnikov-toting federal forces have taken over the site, patrolling it with military trucks as Mekele residents look on in disgust.

"This is our pride, our history," tuktuk driver Daniel Girmay told AFP while drinking tea at a cafe across the street.

"I hate those soldiers so much I don't want to see their faces." 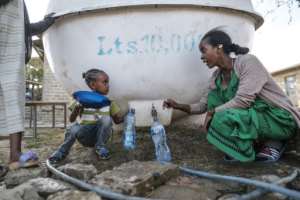 A displaced woman and child collect water from a tank at a school where they are sheltering. By EDUARDO SOTERAS (AFP)

It is just one example of how Mekele, the former TPLF power base, has been transformed by the gruesome conflict still grinding on in northern Ethiopia.

Many of the city's schools are now camps for the displaced. Its paediatric wards teem with children nursing bullet and shrapnel wounds, some of whom have had limbs blown off.

Women walk the streets wearing black as news of dead relatives trickles in from rural areas that remain inaccessible.

"This was a fast-growing city, it was a very vibrant city. It was alive for 24 hours," said Dr Kibrom Gebreselassie, chief clinical director at Mekele's Ayder Referral Hospital.

"Now, as you can see, it is covered in a blanket of sadness."

Abiy, winner of the 2019 Nobel Peace Prize, announced military operations against the TPLF in November, saying the move came in response to TPLF-orchestrated attacks on federal army camps in Mekele and elsewhere. 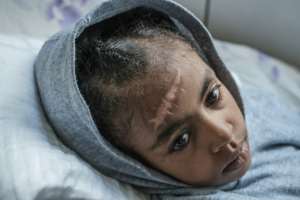 The move came after years of soaring tensions between Abiy and the powerful TPLF which he had been accused of sidelining since his appointment in 2018.

Federal forces closed in on the city three weeks later, and some 26 civilians died as shells rained down on the city's streets, according to Ayder Referral's data.

That was only the beginning of Mekele's misery.

Since then a steady stream of war-wounded have arrived from parts of Tigray hit harder by the fighting, among them orphaned children with nowhere to go once they recover.

"The government is doing nothing while people are affected by the war," Halefom Gebremariam said through tears as doctors treated his 13-year-old son Nahom, who was struck by shrapnel in November, losing his right foot and vision in his right eye.

"Instead they are trying to hide these cases."

Maize farmer Tekleberhan Gebregiorgis has watched the grim spectacle unfold from his hospital bed while being treated for a shrapnel wound in his left knee.

"I'm very sad. I'm supposed to be living my normal life at this moment," he told AFP.

"I am not an armed soldier or a militia fighter. I have also seen other injured civilians like me, and many others are dying. It's very hard for me to bear this."

Across town, in the regional government headquarters, an Abiy-appointed caretaker administration is straining to win over a sceptical Tigrayan public.

"They want to have a government take over the governance activities in the region," he said.

"On the other hand, as we are not elected, they have also some doubts. That's natural." 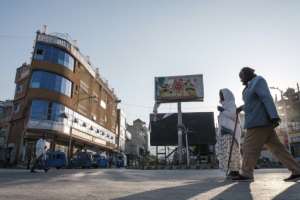 Mekele has been transformed by the conflict. By EDUARDO SOTERAS (AFP)

Mulu said his priorities include reinstating security, repairing damaged infrastructure and laying the groundwork for as-yet-unscheduled elections in Tigray.

While he pointed to progress on tasks like filling civil servant posts, his detractors say securing popular legitimacy will be all but impossible.

Tzegazeab Kamsu of the Tigray opposition party Baytona said Tigrayans associated Mulu with a perceived war on civilians dressed up as a campaign against the TPLF.

Perhaps Mulu's biggest challenge will be to assert control over all of Tigray.

Large swathes of lowland territory in the west and south are controlled by special forces from neighbouring Amhara region.

Eritrean soldiers, meanwhile, are active in much of the mountainous north, their presence confirmed by aid workers and some officials even as it's denied by Addis Ababa and Asmara.

The soldiers have been accused of some of the conflict's most devastating massacres, including the deaths of hundreds in the town of Axum.

Asked if the Eritreans needed to go, Mulu told AFP: "Of course, it's very clear."

This view was widely shared at a secondary school down the road from the Tigray Martyrs' Monument, where displaced families from western Tigray now sleep on donated mattresses in classrooms and science labs, surrounded by what few possessions -- clothing, cooking utensils -- they managed to bring with them.

Many of the displaced cited fear of these forces in explaining why, at least for now, they plan to stay in Mekele.

"At least here we are here among our people who are supporting us," said Tirhas Yibrah, another Humera native living at the school with her husband and three children.

Fix 'dumsor' or Twitter will ditch Ghana for Togo – ASEPA to...
34 minutes ago