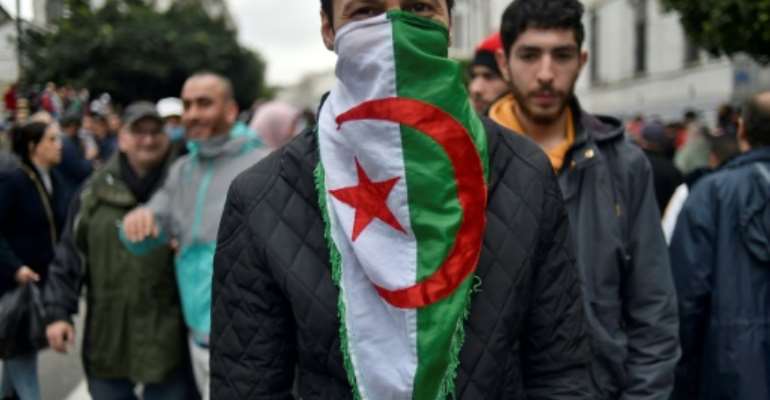 Algerians marched in the capital on the second anniversary of the anti-government "Hirak" protest movement. By RYAD KRAMDI (AFP)

Thousands marched in Algeria's capital and other cities Monday to mark the second anniversary of the "Hirak" protest movement that forced longtime president Abdelaziz Bouteflika from power.

"We are not here to celebrate, but to demand your departure," protesters shouted, referring to a government they see as little different from the one Bouteflika headed for two decades.

Monday's mass rally in Algiers was the largest since weekly Hirak demonstrations were suspended in March last year in response to the Covid-19 pandemic.

Police were deployed in force in the capital, where they set up security checkpoints and carried out identity checks around key flashpoints while helicopters hovered overhead.

At least 59 people were arrested across the North African country, including 26 in Algiers, according to the CNLD prisoners' rights group and AFP journalists. 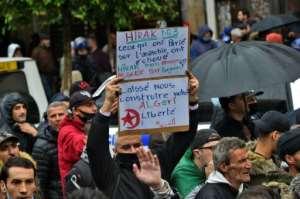 Algerian police were deployed in force and helicopters hovered overhead as checkpoints created traffic jams across the city. By RYAD KRAMDI (AFP)

"The fateful hour has arrived," read one banner brandished by demonstrators, while others waved Algerian and Berber flags.

Police tried to block protesters from gathering around the Grand Post Office, which was at the heart of the mass protests that kicked off in Algiers and several other cities on February 22, 2019 to oppose Bouteflika's bid for a fifth term.

Outside the capital, marches were also being held in Annaba, Oran, Setif and Mostaganem, according to witnesses and social media accounts.

Demonstrators kept up their protests after Bouteflika's resignation, demanding a sweeping overhaul of a ruling system in place since Algeria's independence from France in 1962. 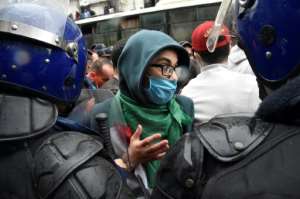 Monday's mass rally in Algiers was the largest since weekly Hirak demonstrations were suspended in March last year in response to the Covid-19 pandemic. By RYAD KRAMDI (AFP)

They only suspended marches last March due to coronavirus restrictions, but calls have recently circulated on social media for a return to the streets.

On the eve of the anniversary, President Abdelmadjid Tebboune -- elected in December 2019 on a very low turnout in a poll boycotted by the protest movement -- announced a limited government reshuffle, in a bid to head off renewed rallies.

The reshuffle saw few major changes by Tebboune, who was once a prime minister under Bouteflika.

Among those retained are Prime Minister Abdelaziz Djerad and Justice Minister Belkacem Zeghmati, who is seen as a symbol of Algeria's judicial crackdown on protesters and opposition activists.

Tebboune also signed a decree dissolving parliament, clearing the way for early elections, but no date has yet been set.

In a gesture of appeasement on Thursday, he announced pardons which have led so far to the release of almost 40 pro-democracy activists, including opposition figure Rachid Nekkaz and journalist Khaled Drareni, who has become a symbol of the struggle for a free press.

Zaki Hannache, a 33-year-old activist, said Hirak supporters were unimpressed by the president's reshuffle and his call for early legislative polls.

"The reshuffle doesn't interest me, it's the same old people," he said. "Same thing with parliament, the new ones (deputies) will work, like the current regime, for their own interests, not for the people."

Amnesty International on Monday accused the authorities of a coordinated strategy to silence critics, based on an investigation it carried out on the cases of 73 activists who were "arbitrarily arrested" and prosecuted. 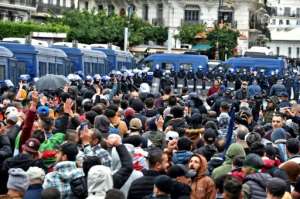 Amnesty International on Monday accused the authorities of a coordinated strategy to silence critics, based on an investigation it carried out on the cases of 73 activists who were "arbitrarily arrested" and prosecuted. By RYAD KRAMDI (AFP)

Our "findings are evidence of a deliberate strategy to crush dissent... that give the lie to the authorities' promises of upholding human rights," said Amna Guellali, the rights group's deputy director for the Middle East and North Africa.

Many of those given presidential pardons in recent days "were peaceful activists who... should never have been detained in the first place," she said.

Last Tuesday, thousands of Algerians rallied in the northern town of Kherrata, where the first major protest erupted in 2019 against Bouteflika's regime.