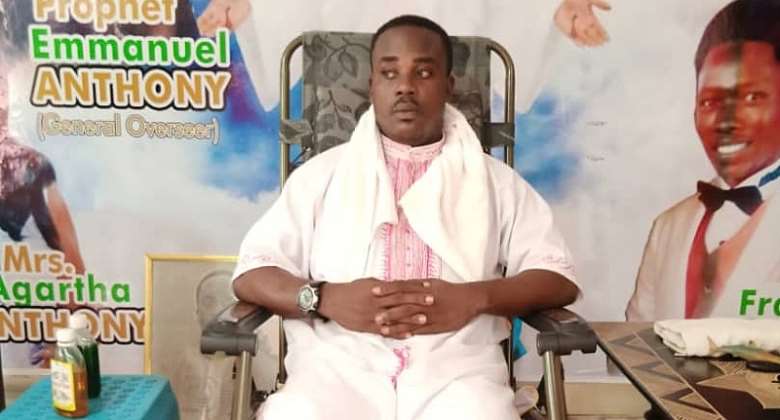 Prophet Emmanuel Anthony aka Osofo Emma or Ogyam 1, the founder and leader of the Hands of God Power Ministry International claim witchcraft can be bought.

He said some are also born with it.

"There are some parts of Ghana where one can visit and witchcraft would be sold to you just like one buys an item from the market."

Osɔfo said this when he spoke to D.C. Kwame Kwakye on his popular social and religious programme 'About Life' on GBC Radio Central today, 21st February, 2021 on the topic "How does one get witchcraft?"

Ogyam 1 comment follows a caller who had called to ask whether witchcraft can be bought or not and needed some clarity.

In answering, he said some people are born witches. "This is because even while they were in their mother's womb, they were taken out spiritually to attend the meetings of witches and wizards."

He added, "Such a baby would be born already a witch or wizard and would be able to say things above their age to their parents. This is because spiritually, the child has already been exposed to all the family issues".

Pastor Ogyam 1 noted that, people who are spiritual are either born with it or they go and acquire it from someone.

According to him, in some situations, the mother's witchcraft can be mixed with anything edible and given to the child to also give it to any friend who wants to eat some.

"By this, any child who will eat what was given them by that witch's child, would automatically become either a witch or wizard. These are some of the avenues they also use to get members. These are the reasons why it is very expedient for all parents to be able to protect their wards against evil influences.

"One thing that can help a parent to identify that his child has been bewitched is that your child would become very stubborn and not amenable to any reason. When these things happen then, parents should know that there is something wrong with their children spiritually".

According to Pastor Ogyam 1, witches are the least ranked in the spiritual realm but are the ones who torment humans the most. "Most of our woes are witchcraft driven".

He ended by encouraging people to seek spiritual protection for themselves and their families against witches and wizards.