LGBT in Ghana must cease 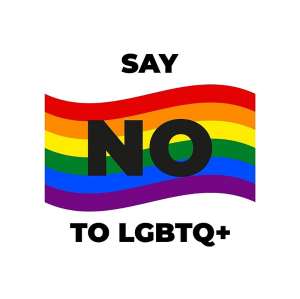 Lesbianism, Gay, Bisexual, and Transgender(LGBT) has been a bane in Ghana for ages. Ghana is seen as a staunch Christian country and being ingrained in the biblical teachings hence objecting to anything that contravenes with the Bible.

For those of us who are conversant with the Bible, we could recall what triggered the wrath of God to annihilate and devastate the people of Sodom and Gomorrah. Some of the aforementioned diabolic acts were part and parcel of the rationale behind the destruction that came upon them.

In the past, LGBT 🏳️‍🌈 was illegal globally until some people emerged to advocate for its legalization. Their argument hinged on “*human rights*” thus their being impeded from exercising their rights without taking into consideration the moral and biblical implications. It’s not surprising to some of us because it has been prophesied in the Bible that ‘lesbianism and gay would be accepted as a sign of the end times.’

Countries that have legalized LGBT includes, USA, UK, CHINA and many more. I want to place premium on these countries because of how influential they are when it comes to decision making in the world. Their robust economy gives them somewhat control over other countries in the world especially the less developed countries. Those who spearheaded the legalization of LGBT in the aforementioned countries are pulling the strings behind the scenes to make sure it trickles down to the other countries in the world of which Ghana has been one of the main targets.

Under President Trump’s administration, he barred LGBT people from being enrolled in state institutions (police, military and government administration/institutions ) in the US. After bequeathing the presidential throne to Joe Biden who promised to build “*inclusive and united country”* has repealed the law and even going ahead to appoint LGBT persons to be in his circle. Most of his appointees are open gay and lesbians. This compels me to believe that the promise he made was intended to include and promote LGBT under his watch as president of USA not what we were thinking [eliminate racism]

Recently, some people in Ghana have the audacity and effrontery to build LGBT office in Ghana, Tesano to be precise. They held an occasion to officially open their office and called for interested persons to come and join. The most worrying aspect of whole thing is, top officials came to grace the occasion including representatives from African Union, European Union and other top officials from USA, UK and others were present. Their head made it clear that “*they have come to stay.*”

Rumor has it that some powerful leaders in the developed countries are pushing the agenda.

Ghanaians have been fuming over the establishment of their office in Ghana pointing fingers at some state institutions in Ghana.

During the vetting of the minister designate for gender and social protection thus Hon. Gloria Adwoa Sarfo she said: ‘*our culture frowns upon such act so it is culturally unacceptable and it must not be condoned.’*

The measures underneath must be adhered to in order to eradicate them from the system:

The Christian council must speak against it publicly by criticizing, lambasting and chiding the individuals involved. They should embark on rigorous sensitization to enlighten the general public on the moral and social repercussions of succumbing to such act.

The media has a crucial role to play in our quest to eliminate them from the society. Journalists should refrain from granting interview with persons affiliated to LGBT. When they’re called to broadcast their programs , their request should be declined. If possible, I mean legally possible, the National media commission(NCA) in collaboration with the Ghana journalists Association (GJA) liaising with parliament should enact a law that bars all media houses from interviewing and taking coverage of LGBT programs.

The Ghana Union Movement flagbearer, Christian Kwabena Andrews popularly known as ‘Osofo Kyiri Abosom’ has spewed his disgust against the agenda saying ‘*it is an abomination in Ghana.’* We want other political stalwarts such as the president, Vice President, speaker of parliament, and other top officials to discourage it and voice out publicly.

Brethren, the Bible makes us understand that in the last days all these shall come to pass but woe unto thee who falls victim. I would urge all and sundry to decline any offer that seeks to get us involved in this diabolic act. The Christian fraternity finds this act to be *abhorrent, repugnant, and despicable *