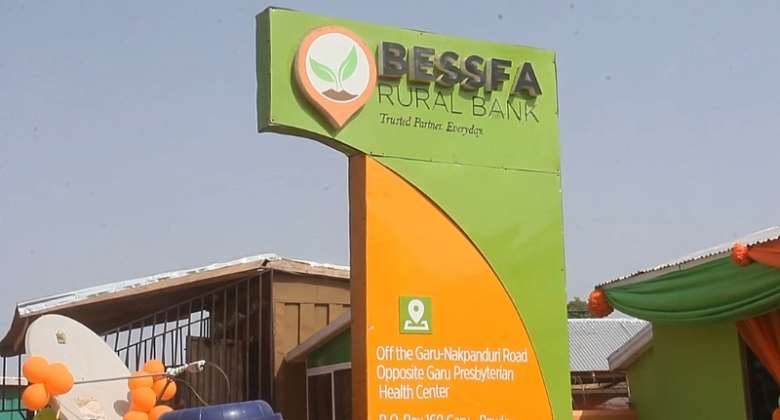 The Bawku East Small Scale Farmers Association (BESSFA) Rural Bank in Garu in the Upper East Region has commissioned two of its branches at Nalerigu and Bunkpurugu districts in the North East Region.

The people's centred Bank was established 37years ago to provide small holders farmers financial services primarily and had its headquarters at Garu, the district capital.

Before the establishment of BESSFA rural bank branches at Nakpanduri, Nalerigu and Bunkpurugu residents had to travel to Walewale in the West Mamprusi District for banking services.

The General Manager of BESSFA rural bank, Alhaji Hayatudeen Awudu Ibrahim said with their strategic expansion plan they had all it's to provide essential services to satisfy their cherished customers.

Alhaji Hayatudeen, however, noted that there was no need for the youth to move to the southern part of the country to seek nonexistent jobs as the bank is ready to support farmers with improved seeds, teach them how to sow, how to apply fertiliser and harvest to improve their livelihood.

Chimsi Musah, the Municipal Coordinating Director for East Mamprusi Municipal Assembly, said the opening of the two branches in the area was a great relief to pensioners, public service workers and the vulnerable who can easily receive their monthly allowances and other banking services without travelling long distances.

Chimsi Musah added that the East Municipal Assembly together with the security agencies in the district are on top of their game in ensuring peace and maximum security in the area for travellers.

At Bunkpurugu in the Bunkpurugu district, a representative by the chief of the area together with the officials commissioned the bank.

The Deputy District Coordinator, Ibrahim Kamal-Deen said two banks in the area couldn't survive but they are convinced that BESSFA, with its best records, would excel and stand tall to assist farmers and workers in the area.

Dubik Timothy, an agricultural officer said they are happy BESSFA rural bank has extended its branches to the good people of Bunkpurugu.

He called on the management of the BESSFA rural bank to assist women groups and other organisations to access more credit facilities.

Madam Victoria said, her area has no bank and doing business without a bank is a challenge to them as businesswomen who often carry bulky cash. "No bank has ever been established in Bunkpurugu aside the collapsed banks."

She emphasised that with the presence of BESSFA rural bank they can now safely conduct proper business.