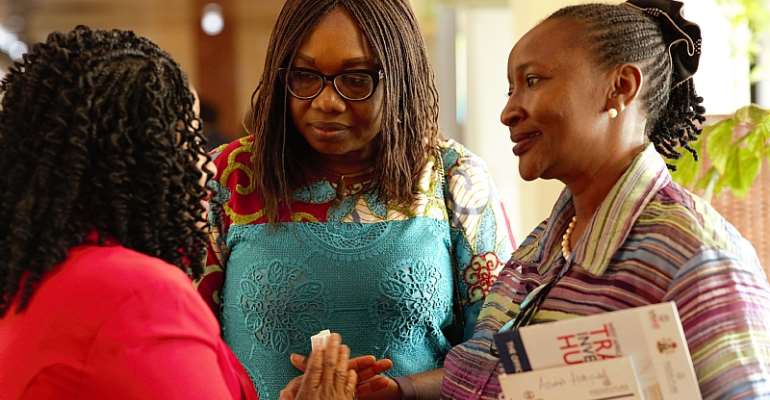 and placing women in at least 70 percent of new supervisory and factory jobs. This factory also advances the goals of the Prosper Africa initiative, with increased apparel production primarily satisfying the demand for uniforms for healthcare workers in the United States due to COVID-19.

Under this co-investment partnership with the Trade Hub, Ethical Apparel Africa will receive a $1.35 million grant underpinning an equity investment in Maagrace’s Koforidua factory. Co-funded by USAID/Ghana and USAID/West Africa, this partnership will expand Ghana’s apparel manufacturing industry by providing modern equipment and technical expertise to Maagrace.

“Ethical Apparel Africa is an exciting co-investment opportunity for the Trade Hub,” says Michael Clements, the Trade Hub’s Chief of Party. “They are an apparel manufacturing company in West Africa who will demonstrate that ethical garment manufacturing can be the norm through delivering cost-

competitive, high-quality products while also ensuring that workers are respected, empowered, and are paid living wages.”

Once its model factory is fully operational with new equipment and more efficient processes, Ethical Apparel Africa will export $19 million over the next three years, with at least 80 percent of exports targeting the U.S. market duty-free under the African Growth and Opportunity Act (AGOA). The partnership will also focus on placing women in supervisory roles to change gender norms in the garment industry and ensure that over 50 percent of factory middle managers are women.

“We see [Africa] as being the next frontier of manufacturing for garments,” says Keren Pybus, co- founder and CEO of Ethical Apparel Africa. “But our operating model is based on the fact that all manufacturing should be done ethically. And to us ‘ethical’ is more than just doing the baseline

As the $3 trillion global apparel industry looks for its next manufacturing hub, there is a major opportunity for Ghana to build industry, create jobs, and develop its export economy. Low costs of

“We will be implementing an efficient model that goes beyond compliance to achieve best-in-class standards, and this will be open for other factories to learn from. This project also gives us the ability to create sustainable employment that will focus on the economic empowerment of women and youth,” says Mrs. Pybus.

About USAID: The United States Agency for International Development (USAID) is the lead U.S. Government agency that works to end extreme global poverty and enable resilient, democratic societies to realize their potential.

About W-GDP: The Women’s Global Development and Prosperity Initiative (W-GDP) is a U.S. Government initiative to advance global women’s economic empowerment. W-GDP seeks to reach 50 million women in the developing world by 2025 through U.S. government activities, private-public partnerships, and a new, innovative fund, housed in and managed by the U.S. Agency for International Development.

About Maagrace: Maagrace Garment Industries Limited is a garment manufacturer in Ghana. The factory, located in Koforidua, specializes in uniform production for healthcare workers, police, schools, and other sectors. 75% of Maagrace’s employees are women.