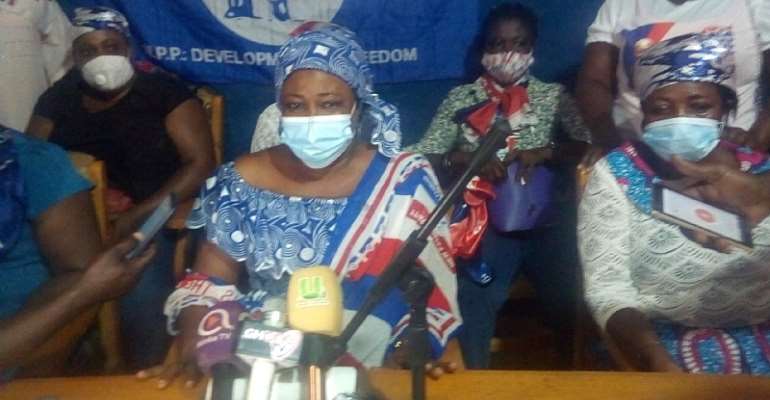 According to the women, their workaholic MCE truly deserves her nomination after 4-years of dedicated service to Agonamam, Central Region and Ghana as a whole.

At a Press Conference held at Agona Swedru to express their appreciation to President Akufo Addo, Madam Barikisu Abdulai who spoke on behalf of the Women groups within the Ruling New Patriotic Party (NPP) in the Agona West Constituency noted that they will forever be grateful to President Akufo Addo for the nomination.

"Your Excellency, we the various Women's groups in the Agona West Constituency made up of Polling station Executives, Grassroots Organizers, Loyal Ladies and other NPP faithfuls highly appreciate the honour bestowed upon Hon. Justina Marigold Assan.

We cannot hide our appreciation for this elevation of Hon. Mrs. Justina Marigold Assan as the Central Regional Minister designate. Your announcement did not come as a surprise to us because our former MCE performed creditably as MCE and therefore deserves the position.

You gave us Minister for Gender, Children and Social Protection in your first term of office and now you have nominated our former MCE as Central Regional Minister designate. All we are saying is thank you, Your Excellency."

Madam Barikisu Abdulai who is also a Women's Organizer for Yaabem South Polling station noted that the constituents have confidence in Hon. Justina Marigold Assan to deliver if the Parliamentary Select Committee approves her nomination.

" We pledged to work assiduously to support Hon. Mrs. Justina Marigold Assan and the NPP Government to better the lives of the people in Agona West Constituency and Ghana as a whole"

In a related development, other groups and Associations including Teacher's Union, Driver's Union, Artisans, Market Women and Staff of the Agona West Municipal Assembly also expressed their appreciation to President Akufo Addo and the Central Regional Chairman of the NPP, Mr. Robert Kutin for nominating Hon. Mrs. Justina Marigold Assan as the Central Regional Minister designate.