Vaccine boost for poor countries as Biden warns of '600,000 dead' 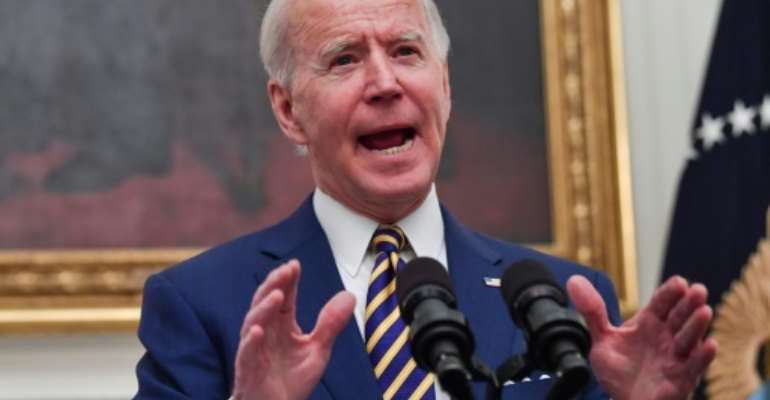 Biden gave the highest estimate yet of the potential coronavirus toll in the US on Friday. By Nicholas Kamm (AFP)

New US President Joe Biden on Friday said "well over 600,000" Americans could die of the coronavirus as he stepped up federal aid in the world's worst-hit country, while international deals won cheaper tests and vaccines for millions in less wealthy nations.

"The virus is surging. We're 400,000 dead, expected to reach well over 600,000," Biden told a news conference, giving his highest estimate yet for the US outbreak's eventual death toll.

His new administration also boosted stimulus handouts as well as payments to help families buy food, with rising numbers of poor US children going hungry as they previously relied on meals at schools -- now shut due to Covid-19.

"The American people can't afford to wait," said Brian Deese of the White House's National Economic Council, adding that many people were "hanging by a thread".

Around the world there were new signs of the depth of damage dealt to the economy, with the closely-watched PMI index showing that Europe is heading for a new recession, and Latin America suffering its steepest drop in foreign trade since the global financial crisis.

As vaccine rollouts gain pace around the world, Hungary announced it was going it alone and buying two million doses of Russia's Sputnik V vaccine, frustrated by the European Union's unwieldy strategy of buying shots in bulk on behalf of members.

"It doesn't matter if the cat is black or white, as long as it catches the mouse," Orban said of the different vaccines, despite wariness from some experts over the fact that Sputnik V was rolled out before large-scale clinical trials. 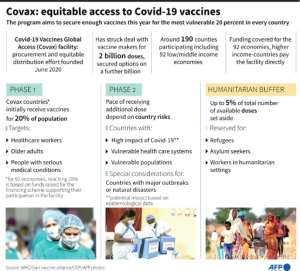 Brazil was meanwhile due to receive two million vaccine doses of a different jab developed by British pharmaceutical firm AstraZeneca and Oxford University.

The World Health Organization has repeatedly warned that richer countries are hogging the vaccine.

But there was good news Friday for poorer nations, as the WHO and pharmaceuticals giant Pfizer announced a deal for up to 40 million initial doses of the Pfizer-BioNTech vaccine to be made available to them through the Covax global pool.

"We can only end the pandemic anywhere if we end it everywhere," said WHO chief Tedros Adhanom Ghebreyesus.

A separate deal, brokered by international agencies working with the WHO, will supply developing nations with tens of millions of rapid antigen tests at half the usual $5 price.

In Britain, imams were using their Friday sermons to reassure worshippers that coronavirus vaccines are safe, using their clout in Muslim communities to support the immunisation drive.

"The hesitancy, the anxiety (and) concern is driven by misinformation, conspiracy theories, fake news and rumours," said Qari Asim, chairman of Britain's Mosques and Imams National Advisory Board. 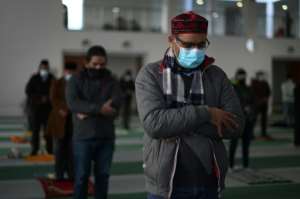 British imams hope they can dispel vaccine fears among the Muslim faithful. By DANIEL LEAL-OLIVAS (AFP)

The imams' campaign comes as Britain battles to constrain a new strain of Covid-19 which the government warned Friday is not only more infectious, but potentially more fatal.

Chief government scientist Patrick Vallance said the strain could be 30-40 percent more deadly for some age groups, though he stressed the assessment relied on sparse data.

The British strain, along with variants first detected in South Africa and Brazil, are fuelling a tightening of travel restrictions, with Belgium banning non-essential trips out of the country.

Denmark meanwhile banned all flights from the United Arab Emirates, saying it needed to make sure the testing regime in Dubai was rigorous enough.

And from music to sports, organisers of large-scale events are grappling with the continued fallout of Covid-19, with Rio de Janeiro's famed carnival called off for this year. 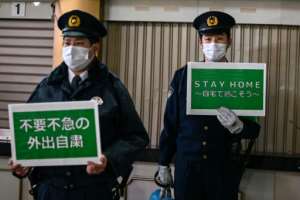 Japan insists it can hold the Olympic games even as it struggles with rising coronavirus cases. By CHARLY TRIBALLEAU (AFP/File)

Real Madrid manager Zinedine Zidane became the latest sports star to test positive, while former tennis world number one Andy Murray announced he will not compete in the Australian Open after failing to find a "workable quarantine" following his own recovery from the virus.

In Japan, organisers of the Tokyo Olympics -- already postponed from 2020 -- are facing almost daily questions over whether the Games can really go ahead in July.

The Japanese government insisted, however, that there was "no truth" to a media report that said "the consensus is that it's too difficult" to hold the Games in 2021.

"Everybody is really determined to make these Olympic Games," International Olympic Committee (IOC) president Thomas Bach said, adding there was "no reason whatsoever" for them not to go ahead.

"We all hope in the Olympics but we all recognise that everyone right now is a little afraid, as we enter the New Year, with some uncertainties," WHO emergencies director Michael Ryan said.