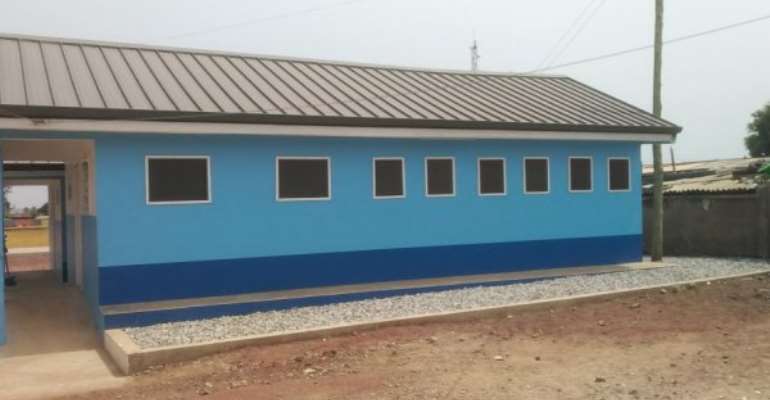 The United Kingdom based WaterAid, an international non-governmental organisation, focused on water, sanitation and hygiene, on Thursday handed over a composite water closet toilet facility, estimated at GH¢800,000 to the La Wireless Cluster of Schools, in Accra.

The facility is made up of 28 seater toilet facility; 14-each for males and female- a bore hole, a water pumping machine and water storage systems.

The toilet facility, in two block building structures, replaces an old dilapidated structure that was pulled down to make way for the new one which began sometime after the visit of Prince Charles, the eldest son of Queen Elizabeth Britain, to Ghana in 2019.

At the ceremony, Right to Play, an organisation that is into the promotion of the comprehensive welfare of children also donated some football materials and sports kits, valued at GH¢50,000.00 to the schools.

The items donated by Right to Play include cones, footballs, first aid kits and a set of jerseys.

Speaking at the ceremony, Mr Iain Walker, the British High Commissioner in Accra, underscored the need of clean water, sanitation and safe environment in promoting quality education for national development.

“Water and sanitation are critical enablers in education,” the British High Commissioner stressed, explaining that children come to school and remain there when the environments are safe and clean.

Mr Jesse Coffie Danku, the Acting Country Director for WaterAid Ghana, expressed worry at the lack of proper toilet facilities in some schools, declaring, “we want to deal with school children who are defecating around”.

He said WaterAid would continue to help with the development of water and sanitation systems, and advised on the need to constantly keep water flowing in the facility.

Mr Danku reminded the La Wireless Cluster of Schools that there would be an evaluation of how they maintained the facility after five years and urged them to keep to good maintenance culture.

Mr Solomon Kotey Nikoi, Chief Executive of the La Dadekotpon Municipal Assembly, announced that the Assembly was in the process of constructing and renovating institutional public toilets, and appealed to WaterAid to come to the aid of the Assembly in such projects.

Mr Isaac McCarthy-Mensah, the Municipal Director of Education, gave the assurance that the schools would maintain the project to ensure its longevity.

Teachers and pupils from the cluster of schools were full of thanks and appreciation to WaterAid a dn Right to Play for their gesture.

Mr Ephraim Addotey, of Classic Consult Limited, who was the Project Officer, in an interview with the Ghana News Agency, said the company did some minor works on some of the pillars of the school buildings while working on the project.