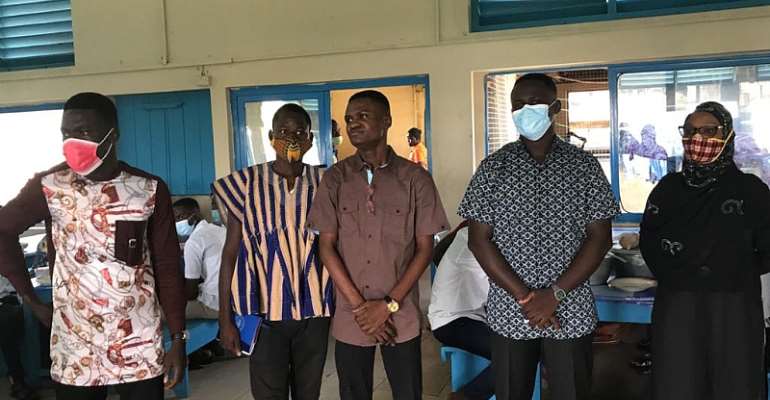 The President made the assurance when addressing Teacher Trainees at the Wesley College of Education (WESCO) on Friday during a visit to the college by the National Officers.

Addressing the Trainees, Master Abdul Mananu who is also the SRC President for the Nusrat Jahan Ahmadiyya College of Education (NJA College of Education) in Wa of the Upper West region called on them to trust in the new leadership of the association as they were available to work for the interest of Teacher Trainees.

He also urged them to always address their grievances through the association through their local TTAG and not taking laws into their hands.

"Your (SRC) President is available, channel your issues through him, and just a phone call, I don't hesitate when I pick your President's call because he is one of my trusted allies" he stated

On his part, the National Coordinator for TTAG Owusu Yaboah Joshua called on the Trainees to rally behind the new leadership so that they can make TTAG the association Trainees are yearning to have.

He also assured members of the association of their commitment to moving TTAG forward for the betterment of all trainees and education in general.

ABOUT THE TEACHER TRAINEES ASSOCIATION OF GHANA (TTAG)

Historically, teacher trainees organize agitations in 1970s and early 1980s on grounds of fair treatment and recognition both by the government and college authorities.

It is on record that in the 1970s, teacher trainees organize meetings to petition the government when they felt threatened as a result of their uncertainty about their status and qualification.

Again, there was a similar agitation for the recognition of trainees allowances in the early 1980s.

However, many beneficiaries of teachers of education afterward had a deep seated conviction about what a union of teacher trainees could do for its members and nation at large.

Many were of the view that, even though the National Union of Ghana Students (NUGS) existed, their focus was more on issues affecting university students.

Many also agreed that teacher trainees need an association for the benefit of co-operation as expected in every human endeavour and some teacher trainees welcomed the idea as a very important tool whiles others were indifferent about the decision.

In the early 1990s teacher trainees forged to form the Teacher Trainees’ Association of Ghana (TTAG). This attempt faced stiff opposition from college authorities. Some employed all kinds of

strategies before its germination.

Apparently their contention was that such a union formed will make colleges of education,

the then teacher training college ungovernable.

This notwithstanding, as also said by Nathanael Greene that ―we fight, we get beat, arise and fight again‖ between the end of the 1994/95 and the beginning of the 1995/96 academic year, the ground became fertile for the formation of TTAG.

Subsequently, the association was officially, inaugurated colourfully on 3rd February, 1996 at the Presbyterian College of Education by Mrs.

Elizabeth Addabor, the then Director of Teacher Education Division of the Ghana Education Service. Mrs. Addabor is equally on record to

have offered her unflinching support to the founding fathers of the association.

It is worthy of notice that before TTAG was inaugurated, teacher trainees in the three Northern Region had a union called Association of Teacher Training Colleges in the Northern Sector (ATTRICONS).

TTAG has its motto as “A model for development” with the slogan TTAG – We mean well!

Its logo id the resemblance of “Nyansapo” store of Knowledge as the Akan tradition signifies that teachers are intelligent folks.

The pentagonal shape of the logo also shows the five administrative sectors of the association, which comprises Colleges in Ashanti and

In 2001 at the 6th Annual Delegates’Congress at St. John Bosco College, Navrongo, congress then approved a written document as the association’s constitution

Don’t blame your defeat in court on Jean Mensa – Ayikoi Otoo...
45 minutes ago