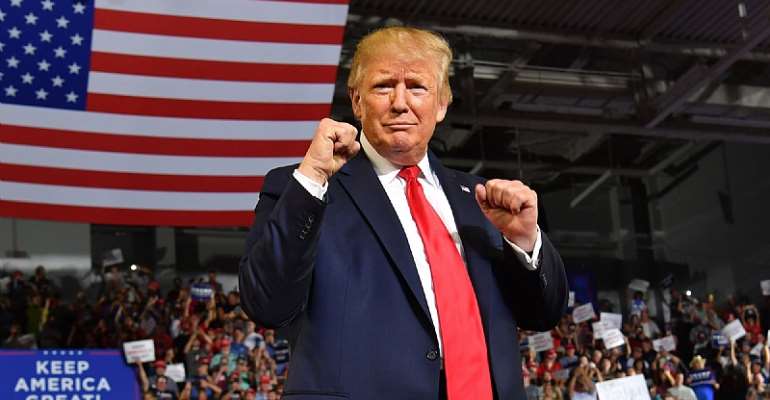 A few months ago, Twitter was still treating Donald Trump's statements on its platform like a raw egg. Only when it became clear that the incumbent US president was unlikely to be able to defend his office did the social media retaliate.

Facebook took Trump's page down for a fortnight and Twitter banned the president from its platform for good. Shortly before taking office, Donald Trump now has some fires he himself has stoked to put out.

Facing imminent impeachment proceedings for "inciting sedition", US President-elect Donald Trump has lost his most important communication platform with a Twitter ban. The short message service announced on Friday evening (local time) that Trump's account @realDonaldTrump would be permanently blocked.

The reason was the "risk of further incitement to violence" after Trump supporters stormed the Capitol in Washington. Critics accuse the Republican of inciting his supporters. Democrats in the House of Representatives are therefore pushing ahead with preparations for possible impeachment proceedings.

Trump's term ends on 20 January with the swearing-in of Democrat Joe Biden. Twitter has been Trump's most important communication platform by far. Via his account @realDonaldTrump, he had addressed his more than 88 million followers directly, sometimes dozens of times a day. The tweets on the account were no longer accessible on Friday evening. Twitter cited two Trump tweets from Friday as the reason for the new block, which in the company's view violated the directive prohibiting the glorification of violence.

Trump made serious accusations against Twitter. In a statement distributed through White House reporters, Trump said: "Twitter employees colluded with Democrats and the radical left in removing my account from their platform to silence me - and you, the 75 million great patriots who voted for me." He did not provide evidence for his accusation. Trump announced they were in negotiations with several other websites and were also considering building their own platform.

Trump is coming under increasing pressure over the Capitol riots that claimed the lives of five people. House leader Nancy Pelosi shared on Friday night (local time) after an online conference with her Democratic caucus colleagues: "It is the hope of the House that the president resigns immediately." In case that did not happen, she said, she had instructed the Rules Committee to make preparations for impeachment proceedings.

A draft resolution prepared by Democratic MPs for impeachment proceedings includes a single charge: "inciting sedition". It accuses Trump of inciting his supporters at a rally, many of whom stormed the Capitol afterward. The Republican thus continued his efforts to obstruct the certification of the results of the presidential election.

With his behaviour, Trump had shown "that he will remain a danger to national security, democracy, and the Constitution if he is allowed to remain in office", the draft continued. Trump must therefore be removed from office. He should also be barred from future government positions.

Democratic Congresswoman Diana DeGette said it was planned to introduce the resolution this Monday. In the Democrat-dominated House of Representatives, approval to open impeachment proceedings is considered certain. However, it would be decided in the US Senate. It is virtually impossible that the procedure in the Senate could be concluded before Biden and his vice-president Kamala Harris are sworn in on 20 January.

The Senate does not meet for its next regular session until 19 January. A memorandum from Senate Republican Majority Leader Mitch McConnell circulated by the Washington Post indicates that under current rules, the earliest the proceedings could begin is 1 p.m. on 20 January, an hour after Biden's swearing-in and Trump's departure from office.

Democrats in Congress are likely to have a different goal with the proceedings: If Trump is found guilty in the Senate, he could additionally be banned from holding federal public office in the future - which would bar him from possibly running in 2024 presidential election. For a conviction, however, at least 67 of the 100 senators would have to vote. For such a two-thirds majority, 17 Republicans would have to support the future 50 Democrats in the Senate, which is currently not foreseeable. If that were to happen anyway, a simple majority would be enough to bar Trump from federal office in the future.

On Friday, Lisa Murkowski became the first Republican senator to call for Trump's resignation. "I want him to resign," Senator Lisa Murkowski - an intra-party critic of Trump - told the Anchorage Daily News newspaper from her home state of Alaska. "He's done enough damage."

Biden announced he would not weigh in on a decision to open impeachment proceedings. The decision is up to Congress, he said in Wilmington, Delaware. His task and that of his future administration would be to urgently take care of the fight against the coronavirus, Covid 19 vaccinations and economic development. At the same time, the Democrat stressed, "I've thought for a long time that President Trump is unfit to hold the office." That, he said, was the reason he decided to run against Trump.

Impeachment proceedings in the Senate could make it much harder for Biden's new administration to get off the ground. The proceedings would largely block the chamber for weeks until a verdict is reached. However, Biden is dependent on the senators confirming his nominated cabinet members and numerous high-ranking government officials in office. He is also dependent on the powerful House for important legislation, for example in the fight against the coronavirus pandemic.

After the Capitol riots on Wednesday, Twitter had already suspended the account @realDonaldTrump for twelve hours because tweets by the president had "repeatedly and severely" violated the platform's guidelines. The short message service had threatened Trump with a permanent ban if he continued to violate Twitter's rules.

Facebook had already announced on Thursday that it would suspend Trump until further notice. Trump's accounts on the online network and on the photo platform Instagram were to remain blocked for at least two weeks, or until his successor, Joe Biden takes office, as Facebook CEO Mark Zuckerberg announced on Thursday. Initially, Facebook had blocked Trump for 24 hours.

Twitter, in particular, has so far limited itself to warnings about Trump because the service considers the president's posts to be historical documents. In recent months, Twitter and Facebook had issued warnings about false information to numerous posts by Trump and in some cases restricted their dissemination.

More US & Canada
Modern Ghana Links
Lady Gaga's stolen dogs returned as their walker recovers from gunshot wounds
More Americans are identifying as LGBTQ than ever before — Poll
Tiger Woods undergoes surgery after car crash in LA
AHRC holds its First Virtual Zoom Discussion of 2021
Half of Americans want Senate to convict Trump
PDL welcomes Joe Biden's American Presidency
Larry King, giant of US broadcasting, dies at 87
US virus deaths top WWII fatalities as Biden warns worst yet to come
'We wanted to be a part of this change' say Biden supporters outside US Capitol
Quote Reports Dossiers
TOP STORIES