Is Ghana’s 8th Parliament a True Parliament of Baboons or Dishonourables? 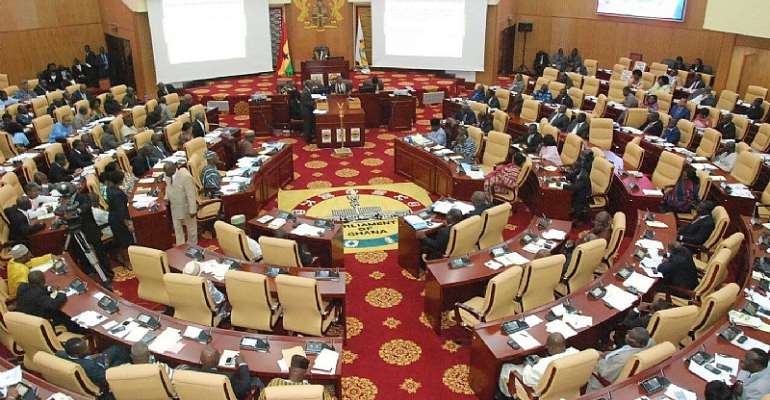 On the night of Wednesday January 6, 2021, I was watching events unfolding on Capitol Hill on CNN and I couldn’t believe what I saw. Little did I know that the Chamber of Ghana’s Parliament would soon be turned into a battlefield of comedy and embarrassment. In fact, I stayed tunned onto CNN till 11pm and decided to retire to bed as I had a busy day on Thursday, though I wanted to watch the election of the Speaker for the 8th Parliament live.

When logged onto Ghanaweb the next morning, I saw series of shocking headings, photos and video clips of anarchy, confusion, invasion, Mrs Ursula Owusu Ekuful sitting on a man in a chair, etc as well as headline that Alban Bagbin had been elected Speaker. In all these what stood out for me was the headline on Mr Carlos Ahenkora, the MP elect for Tema West. I just could not believe what my eyes were reading and looking at. My reaction, unbelievable, outrage, disappointment and anger. How could the MPs elect, subject Ghana to such international ridicule?

On the election of the Speaker, reports were that the former Speaker and candidate of the ruling National Patriotic Party (NPP), Prof Mike Oquaye gained 135 votes and the candidate of the main opposition, the National Democratic Party (NDC) and Methuselah of Parliament under the Fourth Republic, Mr Alban Sumana Kingsford Bagbin received 138 votes with one spoilt ballot in the 275-seat parliament. If these figures were accurate, then, one MP elect did not vote.

I was impressed by the results for a number of reasons. First, the leadership of the ruling party, NPP had not learnt lessons from imposing parliamentary candidates on constituencies that resulted in the party losing their huge majority in parliament and again wanted to impose a Speaker on the new parliament when the party had the equal number of seats with the opposition NDC and therefore relying on the support of one independent MP elect who NPP kicked out of the party and parliament on the last day of the last parliament. What an act of folly, when there were more suitable candidates within the party for the position of Speaker such as the High Commissioners to Canada and UK?

Again, it’s not a good idea that the Executive arm of government gets involved in the selection or appointment of the leader of the Legislative arm which should be independent of the Executive. That is why in the Fourth Republic, the Legislature has been the most ineffective because the Speakers owe allegiance to the Executive and do their bidding rather than serving the electorate and holding the Executive accountable.

Impressed but also surprised that at least, one NPP MP elect voted for the opposition party’s candidate in such a competitive election where everything was at stake. That has never happened in the Fourth Republic. Finally, I felt that the result was true democracy in Ghana and that the results of the December 7, 2020 general elections sent a message to the government and the MPs, it cannot be business as usual and therefore the two political parties must find a better working relationship in the best interest of the nation. For this reason, Ghanaians should be proud of the one or two NPP MPs elect who voted for the opposition candidate. They have done Ghana proud and should not been regarded by NPP as traitors but true patriots.

Regarding the misbehaviour of the MPs elect, when I put on my mobile phone, both our Augusco and Perscoba WhatsApp Platforms were awashed with the same photos, videos and stories of the national disgrace in parliament as well as embarrassing questions from some of my African friends from Nigeria, South Africa, Kenya, Zimbabwe and others in the UK asking me what was happening in Ghana’s Parliament, when the west sells Ghana as a beacon of democracy in Africa.

Mr Carlos Ahenkora, then Tema West MP elect and now sworn in as MP in his own words, claimed that he realised the NPP candidate had lost so he decided to act as he did to cause a rerun of the election. That, his love for NPP made him react as he did. I felt really sad when I read the justification for his action. Not his love for Ghana but for NPP. Really? Does his explanation justifying his uncouth behaviour give credence to similar incidents of disputed elections results in some constituencies during the December 7 2020 general elections and previous ones by party fool soldiers of both NPP and NDC? If an MP elect could resort to such despicable act in the full glare of the world, what is he not capable of doing at a polling station or collation centre to ensure that his party is declared winner in a general election?

I was shocked to know that it’s the same Carlos Ahenkora, then MP and deputy minister for Trade and Industry who went round inspecting registration centres in his constituency in July 2020 when he was alleged to be COVID19 positive resulting in is forced resignation and an apology. He was lucky to have remained a parliamentary candidate for his party and be retained by his constituents, yet he smacks them in the face with more serious and unacceptable conduct. Is he fit to be an MP? If he were to be in the UK, he would have been replaced by his party before the election because he would have lost the seat but in Ghana, he was rewarded for bad behaviour so he did worst.

The leader of the NPP Parliamentary Group and my senior Prescoba, Mr Osei Kyei-Mensah-Bonsu has claimed that Alban Bagbin was not elected but was chosen by consensus (see, “Bagbin didn’t win elections, leadership conferred it on him - Kyei-Mensah-Bonsu”, Ghanaweb, January 8, 2021). Yet, he also claims that some NPP MPs elect were bribed by NDC to vote for Alban Bagbin (see, “NDC succeeded in bribing members on our side to vote Bagbin - Kyei-Mensa-Bonsu suggests”, Ghanaweb, January 10, 2021). So, which is which senior, did Bagbin defeat Prof Mike Oquaye in the Speakership election or was he chosen by consensus? The two claims do not add up.

Ghanaians across the country have condemned the indiscipline of the MPs elect from both sides of the house and expect better from them in the future. It has been reported that a decision on which party is the majority in the house will be made on Friday January 15, 2021 when the house resumes business. Please in the name of Mother Ghana, do not repeat the scenes we saw in the house again. In my view, this matter should be decided after all the parliamentary election petitions in courts have been resolved. In the meantime, NDC should accept NPP as the majority with the independent candidate on condition that should the petitions change the total numbers of any of the two parties, the one with the overall higher number will be the majority.

Now back to the title of the article. Are Ghanaian Parliamentarians honourables or dishonourables? In the UK, the title honourable is used exclusively by members of the Lower Chamber of Parliament, the House of Commons, whilst the Upper Chamber members use the title, Lord and Lady. The title Honourable is only used within the houses of parliament and not outside. Outside parliament, MPs revert to their own titles such as Mr, Mrs, Ms, Dr, Prof, Rev, etc. They also use the title in written correspondence both inside and outside parliament. So, when I meet my MP in my area, I am not allowed to call him honourable because I am not an MP and also not in the houses of Parliament. Even, if I were an MP, I couldn’t refer to him as honourable because we are outside parliament.

Unfortunately, the title “honourable” is grossly abused in Ghana. Every damn fool is called honourable. The worst offenders are journalists who should know better and educate the public. They refer to all ministers, whether MPs or not, MMDCEs, Assembly members and even heads of public institutions as honourable as well as all appointees of the president. The title has lost its value and respect in Ghana and therefore it is no strange that Ghana’s Parliament is a true parliament of baboons by their behaviour. Please note that the title, honourable is for the exclusive use of MPs and only when they are in the houses of parliament. Outside parliament they are not to use the title and non-MPs cannot use the title to refer to MPs as honourables. Perhaps, if Ghanaians learn how to use the title accurately, parliamentarians will regain their respect and improve their behaviour inside and outside houses of parliament.

Massive rot as 9 heads roll at Keta Municipal Assembly over ...
34 minutes ago