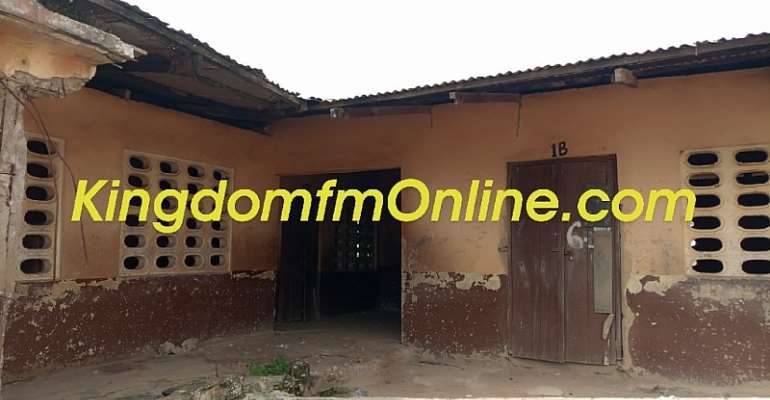 The Nkurakan Roman Catholic Primary School B in the Yilo District of the Eastern Region is in a deplorable state with portions of the roof ripped up.

The deep cracks in the walls of the structure pose a great danger to the students.

When Kingdomfmonline.com visited the community, it observed that the six-unit classroom block had deep cracks and the entire block including the floors, windows, and doors were in a deplorable state.

Mr. Godfred Tetteh, a concerned member of the community said they were worried about the situation of the school and stressed that “The structure is virtually collapsing, it has become a death trap.

The near-collapse building has been marked as a ‘death trap’ by the residents of Nkurakan Community.

Several poorly constructed buildings of this sort have collapsed in several instances in the past, causing severe injury to students.

The structure which has visible cracks with some walls almost falling off and yet, pupils sit under the structure to be tutored.

The student population keeps reducing because many parents are afraid to allow their children to sit under it. We are passionately appealing to the government and NGOs.

The Minister of Information, Kojo Oppong Nkrumah, has disclosed that President Akufo-Addo is receiving briefings from the COVID-19 Technical Taskforce on limited school re-openings and will make a firm decision on whether or not schools should reopen in January by December 30, 2020.

He said the decision will be reached after a cabinet meeting.

Schools have been closed since March 15, 2020, as part of the government’s measures to curtail the spread of the COVID-19.