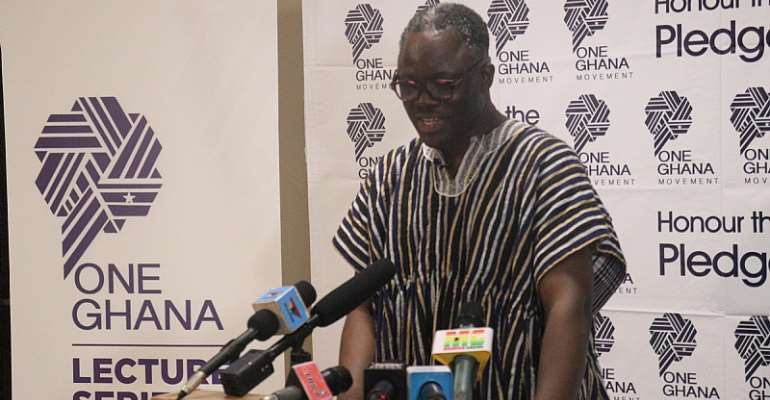 He said, “We sincerely do not need to continue on the path of passing more laws and setting up more institutions, especially after the Office of the Special Prosecutor (OSP) and the Right to Information (RTI) laws. Those are two deadly weapons to kill corruption.”

He was speaking at the maiden edition of the OneGhana Lecture Series, organised by OneGhana Movement, a thought leadership movement on the theme, "The Fight against Corruption: A Mythical Pursuit?"

Contracts protection law never used since it was enacted in 1979

Mr Anyenini, the 2019 Ghana Journalists Association (GJA) Journalist of the Year, argued that the corruption fight would not achieve much if the contracts protection law is not used to prosecute offenders.

“This is a scant but monstrous six-sectioned one-page law crafted to exact high-quality execution of government-sponsored infrastructural contracts and service delivery,” he said

Mr Anyenini explained that a violation, especially making fraudulent payments, attracts a refund of up to three times the value of the contract plus a possible jail term of up to 10 years.

“It is curious that this apparently watertight anti-corruption law, with clear purpose to produce substantial deterrence and in the event of successful prosecution under it to recover punitively and deny a convict any benefit of the proceeds of the crime, is not known to have been used since it was enacted in 1979,” he added.

According to him, serious consideration ought to be given to an agenda to oil the resource-starved civic educator - National Commission for Civic Education (NCCE) - to undertake vigorous education to change mindsets and attitudes in schools and communities to revive the patriotic spirit of the Ghanaian.

Glorifying wealth above every virtue

He questioned how Ghanaians have “come to glorify wealth above every virtue and without questioning the source of wealth”.

Mr Anyenini stated that the corruption fight would not achieve much if the Electoral Commission (EC) would not demand, insist and cause to be prosecuted political parties that continue to disregard with impunity the law requiring them to file within six months from December 31, 2020 of each year a detailed report showing the: state of account, sources of funds, members’ dues paid, such as contributions/donations – cash/kind, assets (physical) and audited account for the year.

CHRAJ must be adequately resourced and properly empowered

According to him, the Commission on Human Rights and Administrative Justice (CHRAJ) should be adequately resourced and properly empowered to vigorously pursue and confiscate unexplained wealth from public officeholders.

He lamented that Members of Parliament (MPs) have delayed passing the CHRAJ-sponsored new law on assets declaration requiring verification and publication of declared assets.

Just one paragraph rules of court for CHRAJ

In his view, it only needs one paragraph rules of court for CHRAJ to pursue this non-conviction-based forfeiture or confiscation.

Mr Anyenini reminded the MPs that Ghanaians told the Constitution Review Commission that “though the Constitution attempts to curb the menace of corruption through the assets declaration regime, the absence of compulsion and the lack of transparency in the exercise defeats the very purpose of the regime.”

He argued that until every infraction in the Auditor General’s annual report is pursued to a logical conclusion, the fight against corruption will not achieve much.

By IMANI’s calculation, Ghana loses more than $3 billion every year through corruption.

The amount is said to be about 300 per cent of all the aid Ghana receives in the same period.

According to OccupyGhana, since the promulgation of the Constitution, the total losses to Ghana arising from “irregularities” in public offices, central and local government administration, public institutions, public corporations and statutory bodies reach possibly GH¢40 billion.

He described as shameful, public officers refusing and frustrating persons and media seeking information on matters of corruption, saying this act impedes the fight against corruption.

Prevention mandate of OSP should be made a division

Mr Anyenini also made a strong case for the prevention mandate of the OSP to be made a division staffed with required experts, including accounting and audit professionals, to do a professional job of subjecting major contracts to risk assessment.

He argued that there is no point in shutting the stable doors after the horse has bolted, and called for a deliberate presidential posture discouraging attacks by appointees and party on media and persons fighting corruption to support the president achieve his goal.

Plea bargain in the OSP law

He emphasised plea bargain in the OSP law as another first and good bait for corruption fishers.

Ghana's 2006 Whistleblower Act enables citizens to disclose information about the corrupt or unlawful activities of other people.

It offers them protection from victimisation linked to such disclosures.

The act accepts six types of impropriety that can be disclosed: economic crime, breaking a law or failing to obey a law which a person has a duty to obey, miscarriage of justice, waste, misappropriation or mismanagement of public resources, environmental degradation and endangering individual or public safety.

Set in motion board and fund for Whistleblowers

Mr Anyenini called for the board and fund to be set in motion to ensure that whistleblowers, especially journalists, could get 10% of proceeds recovered from the crime.

He wants an end to the lip service around the crusade for an independent Inspector General of Police (IGP) and Police Council.

He argued that the corruption fight would not achieve much success if the Attorney General’s (AG’s) power to appoint private lawyers to prosecute corruption is not activated.

He agreed with CHRAJ’s Deputy Commissioner Richard Quayson’s summary of the scourge of corruption as follows.

“Corruption is an insidious plague that has a wide range of corrosive effects on societies.

“It undermines democracy and the rule of law, leads to violations of human rights, distorts markets, erodes the quality of life and allows organised crime, terrorism and other threats to human security to flourish.

“It hampers efforts to alleviate poverty, undermines political stability and economic growth, and diminishes the country’s attractiveness for investment.

Covid19: 85 people arrested for not wearing nose masks in Ko...
34 minutes ago