Election 2020: When You Lose Handover In Peace, Not Pieces — Lambussie Chief 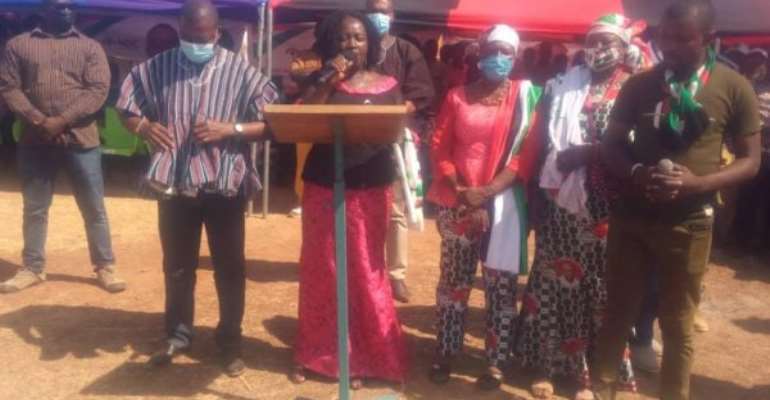 The Paramount Chief of the Lambussie Traditional Area, Bussie Kuoru, Issah Salifu Kazie Tengie ll, has urged political parties to handover the country in peace and not pieces after the December 7 elections.

He explained that the political climate in Ghana was not the best and all must preach peace and maintain peace before, during, and after the December 7 polls.

Kuoru Kazie Tengie gave the caution when Professor Jane Naana Opoku-Agyemang, Vice Presidential Candidate of the NDC paid a courtesy call on him at his palace on Sunday, as part of her two-day campaign tour of the Upper West Region.

He urged the two major political parties, the New Patriotic Party (NPP) and the National Democratic Congress (NDC) who are handling Ghana's political affairs to do so with care and avoid acts that are likely to disturb the peace of the country.

Also in Nandom, the Ko Naa, Naa Domepeeh Gyereh, a representative of the Nandom Traditional Council, appealed to Ghanaians to make sure that peace prevails now, during and after the elections.

The Nandom Traditional Council said it is only one presidential candidate of a political party who would win the elections and all must respect the outcome of the results to maintain the needed peace.

Professor Opoku-Agymang in her response said if politics is about development, and it should be so, then it is about peace.

"It is development that brings peace. It is only when people's challenges are reduced that peace begins to grow in their minds", she said.

Professor Opoku-Agymang noted that politics is not about insults because insults create violence.

"It is not about using abusive language, it is not about issuing threats, it is also not about frightening people but a question of ideas and records that win votes", she stated.

The NDC Vice Presidential Candidate explained that politics should not be a contest of insults, adding "let somebody point to us, one country that developed because the people there know how to insult one another".

"It does not serve us well and we are not leaving good records or legacy for the youth to emulate us. We should not turn round and blame the youth that they have no respect for the elderly who set the examples", she pointed out.

Professor Opoku-Agymang held separate rallies at Piina in the Lambussie District, Nandom in the Nandom District, Zambo in the Lawra District, Jirapa in the Jirapa District, and Takpo in the Nadowli/Kaleo District to canvass for votes for the NDC.