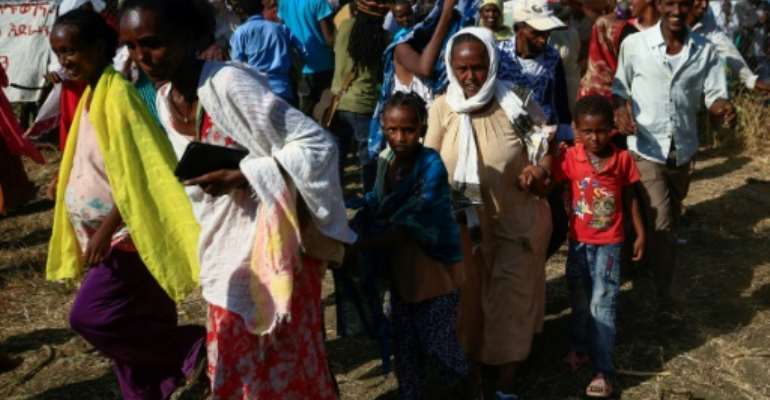 Tens of thousands have fled the fighting, crossing to neighbouring Sudan. By ASHRAF SHAZLY (AFP)

Ethiopia's government claimed advances in its battle against the dissident Tigray region on Saturday, while showing no signs of bowing to international pressure for a halt to the conflict that has caused tens of thousands to flee and raised fears of a humanitarian disaster.

"Our defence forces are currently marching on Mekele," the Ethiopia State of Emergency Fact Check, a government agency, said Saturday. The regional capital is the seat of the Tigray People's Liberation Front (TPLF), which the government is seeking to dislodge from power.

The agency also said the national army had captured a string of towns in Tigray, including the ancient city of Aksum and Adigrat, 117 kilometres (73 miles) north of Mekele.

In a statement, the TPLF said there had been a "heavy bombardment" of Adigrat, but did not say who was now in control.

A communications blackout in the region has made assertions from both sides in the conflict difficult to verify.

Prime Minister Abiy Ahmed -- last year's Nobel Peace Prize winner -- unleashed a military campaign against the TPLF on November 4, accusing its forces of attacking two federal military camps in the region and the party of defying his government and seeking to destabilise it.

Hundreds of people are reported to have been killed in the conflict in Africa's second most populous country, while tens of thousands have fled the fighting, crossing to neighbouring Sudan.

The UN says a "full-scale humanitarian crisis" is unfolding, with 36,000 people having streamed into neighbouring Sudan during the last two weeks. By ASHRAF SHAZLY (AFP)

In a statement Saturday, Abiy praised his army's advance. "Our forces have now fully liberated Adigrat town from TPLF militia as of today," he said.

"Together with the rest of Ethiopia, we will work to ensure that all humanitarian needs will be addressed," Abiy added.

"The overall safety and well-being of the people of Tigray is of paramount importance to the Federal government and we will do all that is necessary to ensure stability prevails in the Tigray region and that our citizens are free from harm and want," he said.

The TPLF led the overthrow of Mengistu Hailemariam, head of Ethiopia's military Derg regime, in 1991 and dominated the country's politics until Abiy became prime minister in 2018.

The party continues to rule Tigray, one of 10 regional states under Ethiopia's system of ethnic federalism whereby by regions are delineated by ethnicity and language.

TPLF leaders have complained of being sidelined and blamed for the country's woes. The bitter feud with the central government led the TPLF to hold their own elections this year in defiance of a postponement due to the coronavirus pandemic.

Abiy has so far spurned all calls for peace.

On Friday, the African Union appointed three former national presidents as special envoys who will be dispatched "in the coming days": Joaquim Chissano of Mozambique, Ellen Johnson Sirleaf of Liberia and Kgalema Motlanthe of South Africa.

"The Envoys will travel to Ethiopia with a view to helping to mediate between the parties to the conflict in the sister Federal Democratic Republic of Ethiopia," said South Africa's President Cyril Ramaphosa, the current AU chairperson.

The Ethiopia State of Emergency Fact Check agency said Abiy would meet with the envoys. However it also contradicted Ramaphosa, saying, "News circulating that the envoys will be traveling to Ethiopia to mediate between the Federal Government and TPLF criminal element is fake."

US officials said they, too, had urged de-escalation, but saw little prospect for negotiations.

"Neither party, from everything we hear, is interested in mediation," said Tibor Nagy, the top US diplomat for Africa.

Military action has already spread beyond Tigray's borders with the TPLF firing rockets at the Eritrean capital Asmara, to the north, and the Ethiopian city of Bahir Dar to the southwest.

Abiy (Centre R) has so far spurned all calls for peace.. By EDUARDO SOTERAS (AFP/File)

The campaign has seen warplanes bombing Tigray and heavy fighting, while Amnesty International has documented a gruesome massacre in which "scores, and likely hundreds, of people were stabbed or hacked to death" in the southwest town of Mai-Kadra.

Meanwhile, UN chief Antonio Guterres warned of a "dramatic humanitarian impact" from the fighting, requesting "the opening of humanitarian corridors and the truces that might be necessary for humanitarian aid to be delivered" -- without specifying where such corridors could be located.

The UN says a "full-scale humanitarian crisis" is unfolding, with 36,000 people having streamed into neighbouring Sudan during the last two weeks.

UN officials in Geneva said that around $200 million will be needed to provide assistance to as many as 200,000 people who could flee unrest over the next six months.