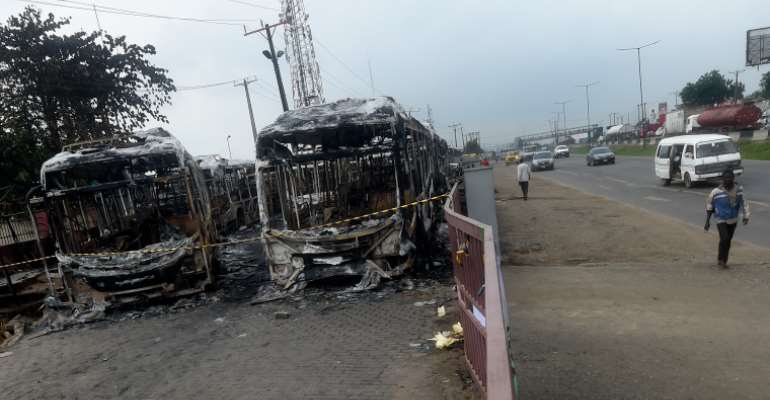 People in Lagos on October 26, 2020, walk past buses burnt during a protest against police brutality. Nigerian President Muhammadu Buhari on October 25 appealed for "peace" as authorities struggled to halt looting during continued unrest. A journalist who went to cover looting was taken wounded into police custody and turned up dead days later. (Pius Utomi Ekpei/AFP)

Nigerian authorities should ensure a credible and transparent investigation into the death of journalist Onifade Emmanuel Pelumi, a reporter with the independent online Gboah TV broadcaster, and hold those responsible to account, the Committee to Protect Journalists said today.

Pelumi, 20, was last seen alive on October 24 in the custody of police officers in southwestern Lagos State after he went to cover attempted robbery by unidentified youths at a government facility in the state capital Ikeja, according to a family friend of Pelumi, who spoke by phone and messaging app with CPJ but did not want to be named for fear of reprisal, and a statement by local media protection group Media Rights Agenda published by the privately-owned The Nigerian Voice news website.

One of Pelumi’s colleagues who went with him to cover the event at the Ikeja suburb of Agege recounted to the family friend and Gboah TV’s management that he saw Pelumi injured with an apparent gunshot wound in a jacket labeled with “press” being taken by the officers along with some of the youths into a police van, according to the family friend, a report by privately-owned Premium Times news website and a video posted by Gboah TV on Facebook. The reports, which did not identify the colleague by name, said police had attacked the crowd with gunfire and swords.

“Authorities in Nigeria must investigate and make public the circumstances behind the death of Onifade Pelumi, and immediately prosecute those responsible,” said Angela Quintal, CPJ Africa program’s coordinator, from New York. “This tragedy is compounded by the unconscionable fact that the journalist’s family and employer have been met with repeated obfuscation and delay in their attempts to locate Pelumi and discover what happened to him.”

From October 24 until October 27, Pelumi’s family and his colleagues conducted a search for Pelumi in various police stations and other parts of Lagos without success, according to the same report by Premium Times and a Gboah TV staff member who spoke to CPJ on the condition of anonymity for fear of reprisal.

On October 27, the family and Gboah TV posted a missing person’s announcement on various social media platforms, according to Premium Times and the family friend.

That day, the family got a call from the police who scheduled an appointment with them for October 28 at their headquarters in Ikeja to discuss the possibility that Pelumi was in police custody, according to the same report by Premium Times and the family friend.

On October 28, police told Pelumi’s family and colleagues that they had arrested five people at Agege on October 24, but that one of those arrested was dead and his corpse was deposited at a mortuary in Ikorodu, a town in the north of Lagos, according to the family friend and the Premium Times.

Another appointment was then scheduled for October 29 but shifted to October 30, when the family went and found Pelumi’s corpse at the mortuary, according to the same Premium Times report, Pelumi’s family lawyer, Lekan Egberongbe, who spoke by phone with CPJ, and the Gboah TV staff.

Following the identification of the journalist’s body, police said Pelumi was not among those they arrested on October 24, that they found his body on the ground at an unspecified location, and decided to put it in the mortuary, according to Egberongbe.

Egberongbe told CPJ by phone that he and fellow lawyers had written this week to the police, the Lagos State Attorney General, and the state government for updates on the investigation.

On November 11, a spokesperson for the Lagos State police command, Olumuyiwa Adejobi, told CPJ via text message that Pelumi’s death had been reported to a new judicial panel of inquiry investigating allegations of police brutality, but declined to comment further.

Since 1992, CPJ has documented the killing of at least 11 journalists in Nigeria in relation to their work. At least 12 others have been killed in less clear circumstances.