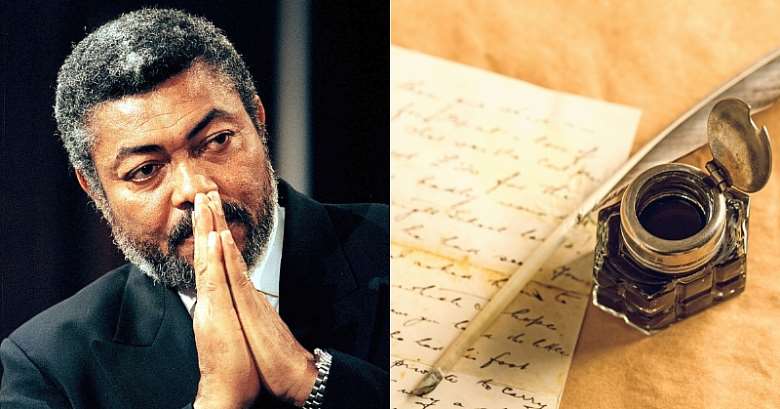 Emotional pain can be an incurable human condition, particularly if it is tied to an object of great value. To every heart that remains in great pain over some actions or inactions of the late Ft Lt Jerry John Rawlings, I am deeply sorry you have had such experiences. But I understand how you feel.

If I can’t understand, I can at least imagine because I once suffered a tragic loss. My father was killed. I was only six years old at the time when he got murdered in cold blood. Since then, his killer has been an image I have detested. I think of many ways my life would have been better if my dad were alive and get raged even more. I have always kept my distance from all ‘relations’ of my papa’s murderer and I am not sure if I’ll ever be able to stop.

To make this clearer, my name is Ebenezer Quist Agbey Yaw (EQAY). My father, Geoffrey Quist, was killed by the death agent called diabetes. I had and still have an extraordinary mother but the void of having no father figure in my life has had its negative repercussions on me. All my life, I have looked at many diabetes-causers like an enemy. I am still angered that this sickness denied me an invaluable bond for almost my entire life.

If our past president was by any means a reason for which any form of an eternal void was created in your life, I can imagine what you have felt and still feel. I can think of what life has been like for you, hearing the former president’s voice consistently on airwaves. I can visualize that you wish he went through some excruciating pain for revenge. I can also see why you may have a sort of relief hearing that Papa J has taken his last breath. Understandably, your feelings aren’t misplaced.

As depressing as these imaginations are for me, from one viewpoint, I believe your case is better than mine. Unlike you, I have never heard diabetes’ voice. It never explained itself to me. I just wished to know ‘why?’ or what I’d done to deserve my great loss. There has been nothing.

I could never prosecute diabetes. I could never see any good sides of it. I could never benefit from any legacy this killer disease left behind. It snatched away my father and that was simply the end of the story.

I am here today as a painter. I know your marks of pain may be indelible. However, it is my earnest expectation that by the time you finish reading the subsequent points, I would have succeeded in covering the old paintings of pain with bright colourful ones of gratitude.

A norm of blood spills
From the day Ghana was able to overthrow British rule, a precedent was set that whoever was strongly-willed enough could take down a government they detested. It was no wonder that Osagyefo Dr Kwame Nkrumah, a man whose vision and legacies still make life work in Ghana, had to flee from his homeland and be forced to die untimely.

The ideology of forceful snatching of power had gradually become a norm and in its wake was spontaneous bloodshed. In some African countries, this norm still exists (they never had a Rawlings). If Ghana was ever going to get out of that bloody regime into a stable fourth republic where power would be handed over peacefully without the earth tasting any drop of blood, it had to take a hard-hearted warrior. It needed someone strong enough to bloodily take over the mantle and soft enough hand it over gently to another.

That transition was a feat that was inevitably going to step on many toes and shed blood in the process. Rawlings, remembering this, said in his last extensive interview with Kwaku Sakyi Addo on Asaase Radio,

“the quest for blood was so strong that if we didn’t shed it, we would have gone.”

This notwithstanding, no man has the right to mastermind the demise of another man. It is not justifiable, no matter which way it is looked at.

Nevertheless, it can be understood that if there wasn’t any Rawlings to lead Ghana against many odds into democracy, the most likely outcome would have been a continued ruthless shedding of human blood anytime power exchanged hands, probably to this very day.

If you bore some pain as the unfriendly reshuffling went on, do remember that you are a hero and a living legend. See all your sufferings as the sacrifice it had to take for Ghana to get stable peace. That is what it was. Ghana’s political future could have been gloomy without you.

Ghana should be grateful to you for taking the agonising cross to save posterity. In the same vein, let’s swallow the hard pill of gratitude that the flight lieutenant led a movement which ultimately saved Ghana’s posterity from perpetual war and destruction.

A universal charger
With 73 years of life, Rawlings has proven to all of us that he was capable of putting on different faces. He could (indirectly) descend the gutter with the powerless and also ascend the high table with the powerful. He could punch holes in heads with riffles but also pierce holes in chicks with dimples. In all of this, however, Jerry’s motivation has been unwavering for the most part—he loved his country and was willing to do anything for it.

Legendary boxer, Azumah Nelson, in an interview on Citi TV’s FacetoFace, recalled that JJ used to personally sweep and clean their training room, just so the boxers have enough rest and time to fight and push Ghana’s name forward. Rawlings loved his country and was willing to do anything for it.

As a 'universal charger', he found no trouble assuming whatever face he needed to push any agenda. As a human being, however, this was never going to be without any flaws. The late Jerry, even with his burning passion for Ghana, would have surely made some bad decisions.

Nonetheless, if Sergey Nechayev, a 19th-century Russian revolutionary’s statement that “the end justifies the means” is anything to go by, then let us be grateful for the final result Rawlings’ efforts yielded for Ghana. This will understandably be difficult if you were at the receiving end of many bitter lashes-difficult but possible. An attitude of gratitude will yank out the remnants of hurt in your heart and ultimately serve Ghana better.

At the end of the day, we are all one people. Our hands and hearts should be joined now in love as we strive together to create a brighter future for our motherland.

Sparing the roots
In the heat of cruel coups and unkind clean-up exercises, our former president led a movement that undeniably took away lives and punished many. Some were breadwinners. Others were community heroes. This ultimately caused agony for a lot of people.

I have never witnessed a coup but from books I have read and movies I have watched, the usual order when clearing the way to access power is to eliminate every tree together with their roots.

If a family head is taken, the wife and children must also be, lest they toughen up to cause any havoc in the future.

Yet, in the case of our courageous lieutenant's takeovers, a borderline was drawn between a man and his wife and children.

A tree may be pulled down but compassion is given to the roots.

At the height of brutality that forced Ghana out of revolution into democracy, the respect for human life was not completely let go.

Today, graciously, there live many descendants of men whose lives were sadly ended for one reason or another.

In a moment of deep loss, it is only human to weep, curse and revenge. Losing my father to diabetes taught me this.

Be that as it may, if we look at what we still have, what we were privileged to be left with, how worse situations could have been, and the greater good that was done, gratitude fills the heart spontaneously.

This is was I ask of us all. You may have suffered some needless, severe, horrendous sting. All the same, let’s find a reason to be grateful.

Life should have been better but it would have easily been worse without the passion for country, love for humanity, care for posterity and vision for prosperity that Jerry went about his relentless dealings with.

So I ask that you please be grateful. You have already endured a lot for the sake of Ghana. I trust you will do this too. Thank you, hero!