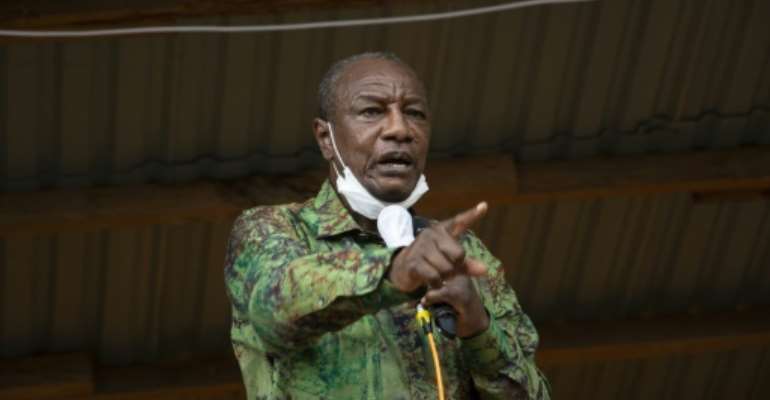 Long a leading opposition figure, Guinea's Alpha Conde is starting a third term as president to carry on his mission to reform and build a better future but faces growing charges of autocratic drift and plunging the country into crisis.

He became the west African state's first democratically elected president in 2010 and was returned to office by voters in 2015.

However, critics, from opposition politicians to human rights groups say he has become authoritarian, intolerant of dissent and pushed through a new constitution back in March to enable him to remain in power.

Conde, still trim at 82 despite a slight limp, argued the constitutional revamp would help modernise Guinea.

The constitutional court declared him the winner of the election on Saturday as security forces surrounded his main opponent's house following deadly clashes.

The president faced down a mass protest movement and the criticism of the United States and former colonial power France, who suspected a ploy to reset the presidential term counter, enabling him to run again.

Conde appealed to women and the youth to support his official candidacy for a third term in September.

"I have fought for 45 years, I was in the opposition ... it's extraordinary that I should be considered an anti-democratic dictator," Conde said in an October interview with France 24 television and RFI radio.

The president's tactical skills were forged by years in exile or prison, followed by an almost miraculous rise to power.

When he turns to his record, he talks up the building of hydro-electric dams, rewriting mining contracts and tightening control over the army -- all this while the country was struggling with an Ebola epidemic for more than two years up to 2016.

The centrepiece of his second term was the constitutional reform, which he argued was necessary to fight female genital mutilation and ensure fairer distribution of the country's mineral wealth.

But it has sparked bitter clashes and adversaries see him as a man in a hurry -- sharp-tongued, impulsive, authoritarian.

He once mocked students who demanded he provide the computer tablets he had promised during his election campaign.

"You're like baby goats -- 'tablets, tablets'," he said sarcastically, as he performed a little goat-like jump.

Human Rights Watch points to the disastrous consequences for people and the environment of efforts to force up the output of bauxite, of which Guinea boasts the world's biggest reserves.

Despite such resources, more than half the population live below the poverty line, the UN says.

He has created "a banana republic -- a dictatorship in all but name", Diallo said.

Conde was born in Boke, western Guinea, on March 3, 1938, to a family in the Malinke ethnic group, the country's second-largest.

Aged just 15, he headed to France, the colonial power, to study economy, law and sociology, and thereafter taught at the Sorbonne.

In the heady years after independence in 1958, Conde led a French federation of African students and spurred opposition to the dictatorship of Guinea's first post-colonial leader, Ahmed Sekou Toure.

Alpha Conde's tactical skills have been forged by years in exile or prison, followed by an almost miraculous rise to power. By FREDERICK FLORIN (AFP/File)

Sekou Toure had Conde sentenced to death in absentia in 1970.

He returned to the country in 1991, seven years after Sekou Toure's death, and contested presidential elections in 1993 and 1998.

He was credited with winning 27 percent of the vote in the first and 18 percent in the second -- neither ballot was deemed internationally to be free and transparent.

His activism as founder of the RPG was deemed a threat by the then-president, Lansana Conte, who had him arrested just after the 1998 elections.

In 2000, he was given a five-year jail term for "harming the authority of state and the integrity of national territory," but was pardoned the following year thanks to international pressure.

The former opposition leader became Guinea's first democratically elected president in 2010 and was returned to office by voters in 2015. By CELLOU BINANI (AFP/File)

In 2010 came the annus mirabilis, when Conde, after a defeat by Diallo in the first round, romped to victory in the runoff.

Conde has been married three times and has one son.