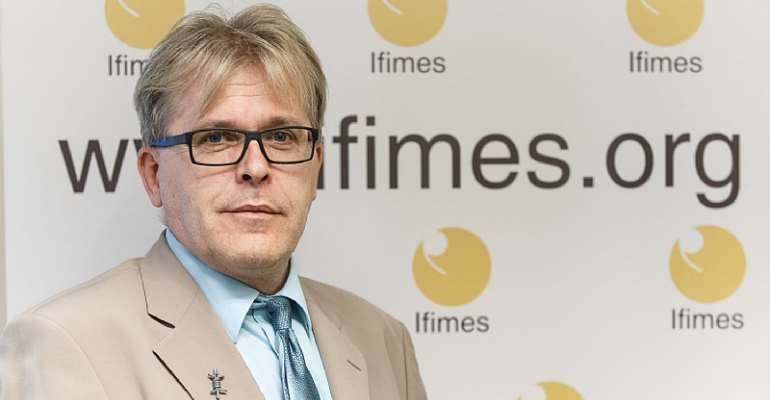 As the present world order weakens, the mega confrontations have appeared more likely: On its post-Soviet revival quest, Russia becomes increasingly assertive in Euro-MED theatre and beyond. The Sino-American relations are increasingly adversarial, with escalating frictions over trade, advanced technology, human rights, and global strategic influence.

Currently, both sides – as president of the US Council of Foreign Relations Richard Haass states – ‘are developing scenarios for a possible war’. The two countries rhetoric has grown so hostile that its speed and severity is unprecedented for the post WWII period, rather belonging to the forgotten vocabulary of 1910s and 1930s. (E.g. referring to PRC as ‘Country of Kung Flu’ or to the US as ‘trigger happy nation’, calling the C-19 ‘China virus’ or ‘US Army brought pathogen’, China’s Foreign Ministry Spokesman referring to the US leadership as ‘Elements deluded by the Capitol Hill metastasis’ while the US State Secretary calls the Chinese Communist Party ‘rogue actor’, and then in return Secretary Pompeo gets proclaimed as ‘the public enemy of mankind’ – just to name but few from the long list of heavy verbal fire exchanges between the two.)

Strategic decoupling between the biggest manufacturer of American goods, China and its largest consumer, the US seems inevitable. It also appears increasingly irreversible, no matter if the change of leaders in Beijing or in Washington may or may not happen beyond 2020. This will of course trigger a global realignment and new fragilities on a default lines on land and seas, in skies, cyberspace and near outer space.

It was expected that by the end of 2020s, Asian economies will be larger than the rest of world’s economies combined. Africa-Middle East were to come up next. Of course, that was only a prediction made before C-19 and the sudden Sino-American rift. Or this was the origin of that rift? – It is still to be seen.

Past the demise of global communism, many in Asia, Africa and Middle East enjoyed for decades, the best of both worlds: Cheep products from China and the military protection (or at least an implicit security guaranty) from the US, nearly for free. This especially goes to the southeaster Asia (formerly representing the major Asian default line), large sways of south Afro-Asia and the Far East.

The imposed re-alignment will hit them particularly hard – from a prosperous meeting point of goods, cultures and ideas to the politico-military default lines. This painful readjustment may last for decades to come. Opting for either side will not only impact economy trade and security but will also determine a health of population and societal model, too.

Unprepared and unwilling for ‘either-or’, particularly Asia missed to build what I called for, for over a decade – a comprehensive cross-continental security setting (the pan-Asian OSCE).

The inland giga-demography, inward looking culture, obedient imitator, humble manufacturer en mas – overnight presses globally and over the sea lanes: From diligent labourer to the omnipresent global power. In the grand rapprochement of 1970s, the coastal areas of China have been identified by the west as its own industrial suburbia, and now that ‘suburbia’ has a coherent planetary plan. The shockwaves swept all in the west. The US – after its initial hangover – undergoes a painful adjustment: There is a growing consensus among all stakeholders in Washington that the strategic engagement is a failed policy with Beijing – something that obviously did not preserve the US interests. Chine is not a dangerous (trade) rival, it is a foe.

All this will now seek for the binary acclamation all over the rest of our world. ‘Time of ‘either-with-us-or-against-us’ comes, while the Middle East – North Africa (MENA) and Afro-Asia have no their third way readily prepared to offer but only alignment with one or the other – reminiscence of the pre WWI Europe with the two rigid blocks.

Beyond the Sino-world, the rest of Asia, Africa and Middle East (ME) are also dominated by mega demographies, brewing social mobilisations, expectations and migrations, inward looking regressive political culture (oft lacking the world-view perspectives and contributions), insecure Asian nuclear powers, and history of rather hierarchical international conduct and architecture than of a multivector vibrant active foreign policy (bandwagoning instead of multilateralism).

All this necessitates to revisit the fundamentals of and reload African Union (AU), Organisation of Islamic Cooperation (OIC), League of Arab States (LAS) and other similar mechanisms, but even more to rethink and reinvigorate the best of the Non-Aligned Movement (NAM) which saved the world from the past irresponsibilities and frictions of the two confronted blocks that contested each other all over the globe for decades.

Case of the EU – AU’s twin sister – is indicative: At present, the EU is destructive in MENA, dismissive with Russia, neuralgic on Turkey and post-Yugoslav space, obedient to China and submissive to the US. None of it serves interest of Europe on a long run.

However, realities are plain to see: the ME seeks for consolidation, Russia for cooperation, China for domination and the US for isolation. Judging the (in-)action of the current Commission, seems the EU does not grasp it well. Therefore, it losses its appeal, and tomorrow it may its substance as well, with overall BRAINXIT. The AU should desirably learn from its Twin’s, not from its own, mistake:

The Indo-Pacific, ‘The Quad’, initiative is not viable policy response to the age of global realignment. It is rather a panicking tactics of imperial retreat (seen in the past with the ‘Coalition of the Willing’) in lieu of the long-term principles shouldering the skilfully calibrated strategic and emancipatory orientation.

MENA and Afro-Asia should not exhaust its entire foreign policy intellectualism on that. A host of historic south-south summit of 1956, champion of true multilateralism and Ghana and Egypt as architects and founding members of NAM should not peripheriese themselves by becoming a default, Maginot Line but should lead a reinvigorated Third way.

Between confrontation and bandwagoning, it is time for a true multilateralism (active and peaceful coexistence postulated by the NAM). The Movement gave for so many and for so long a security shelter and voice above weight, sense of civilisational purpose, and promising future prospect on the planetary quest for a self-realisation of mankind.

Author is chairperson and professor in international law and global political studies, Vienna, Austria. He has authored seven books (for American and European publishers) and numerous articles on, mainly, geopolitics energy and technology.

Professor is editor of the NY-based GHIR (Geopolitics, History and Intl. Relations) journal,

and editorial board member of several similar specialized magazines on three continents.