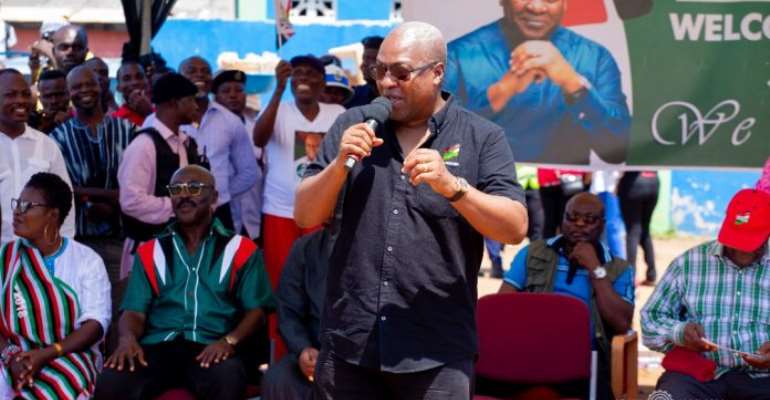 Addressing residents of Kakasunaka in the Kpone Katamanso constituency on Wednesday, 28 October 2020 as part of his campaign tour of the Greater Accra Region, Mr Mahama said the government has since the year 2017 borrowed GHS157 billion, thereby increasing the debt to GDP ratio to an unprecedented 76.7 per cent.

“The recommended debt to GDP profile for a middle-income country is that we should remain not more than 60 per cent debt to GDP. If you pass 60 per cent and you go to 70 per cent and above, you are becoming highly debt distressed, which is the same as HIPC.

"If we take that debt and divide it amongst all Ghanaians, including children, everybody owes almost GHS9000,” he said.

Mr Mahama was amazed at the ballooning national debt stock inspite of attacks on his tenure and pledges by the then opposition New Patriotic Party (NPP) that it was capable of developing the country without loans.

He said when the NPP was in opposition, it created the impression that Ghanaians were sitting on money but were hungry as a result of the policies of the Mahama administration.

“But today we are hungrier than we were in 2016. How many people can eat three square meals a day today? And the question you ask is, where is the money, GHS 157 billion, what have you done with it? Show us”, he said.

Mr Mahama said his government developed the country with the GHS56 billion it took in loans, adding the evidence can be seen all over the country that his government invested in roads, school blocks, hospitals, water and power expansion projects, among others.

The NDC’s presidential candidate said the time for accountability is, however, near and 7th December 2020 is the opportune time for Ghanaians to make the right decision by voting for the NDC to win the elections and create opportunities and prosperity for all.

Mr Mahama said, among others, the next NDC government will focus on job creation, implementation of free primary healthcare to ensure universal access to healthcare, rolling out Free Technical and Vocational Education and Training (T-VET) as well as state-sponsored national apprenticeship programme.