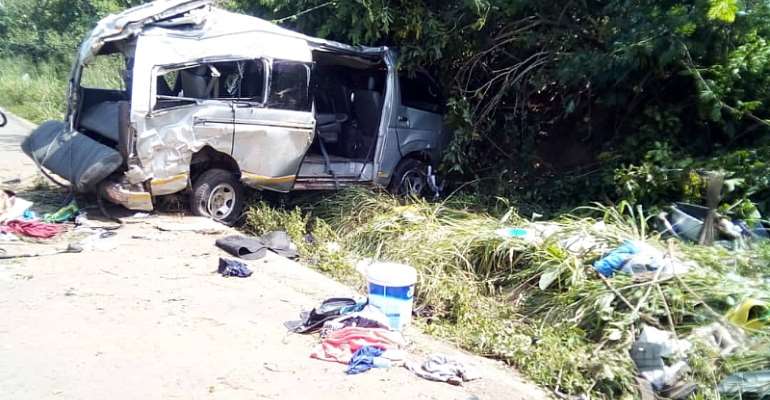 A 34-year-old unidentified woman has died in a tragic road crash on the Kintampo-Techiman Highway at 9:30 am on Thursday, October 29.

The accident involved a single vehicle, a Toyota Hiace Bus with registration number AS 8030-20 travelling from Techiman to Tatale in the Northern Region.

The passengers claim that the bus driver was speeding when the incident happened.

Some of the passengers told Citi News that, upon reaching the Amomankwanta and Krutakyi stretch which is an accident-prone zone, the rear tyre of the bus burst, causing the driver to lose control of the vehicle.

They somersaulted and crashed into the side of the road.

This was corroborated by eyewitnesses and the Kintampo South District Police.

Alhassan Abdulmutil, a passenger who sustained injuries on the head and spine narrated the incident to Citi News.

“We all know that it was the driver's fault. He started with high speed and could overtake two to three cars at a time. Initially, when we came out of the Techiman station, I alerted the driver that his back tyre was not good, so he stopped on the way to pump it. We didn't know whether it was the tyre or something else but before we knew, we were somersaulting.”

The bus had 17 occupants in all, including the driver who escaped unhurt.

The injured passengers have been sent to the Holy Family Hospital in Techiman and the Jema Hospital for treatment.

The female passenger who died is being held at the Jema morgue.

"I want every Okada driver to be a billionaire" — ‘CODA Dri...
7 minutes ago