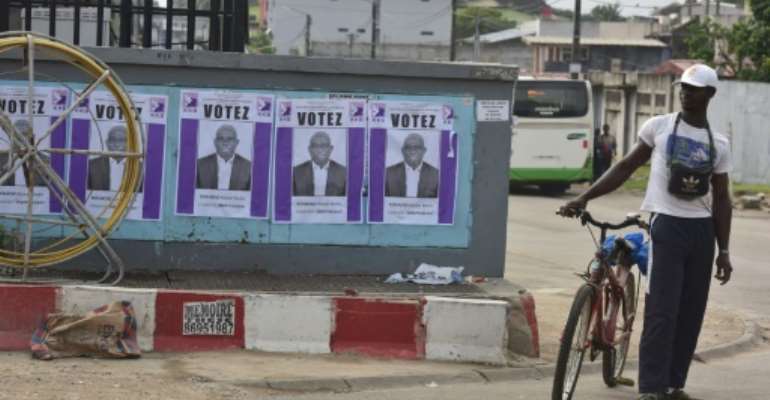 The average age in Ivory Coast is just 19, while the leading candidates in the presidential election are aged 78 and 86. By Issouf SANOGO (AFP/File)

Ivorians on Saturday will be called out to vote in presidential elections where the frontrunners are nearly two generations older than the average citizen.

Three-quarters of Ivory Coast's fast-growing population are under 35 years old -- the average age is just 19.

In contrast, the two men leading the electoral race are Alassane Ouattara, the 78-year-old presidential incumbent, and former head of state Henri Konan Bedie, 86, who governed from 1993 to 1999.

The pair were once adversaries, became allies and now are foes once more -- an on-again, off-again relationship that has been part of the political wallpaper for decades.

A third "oldie" is also casting a shadow over the election debate, but from Europe, where he is awaiting the outcome of proceedings at the International Criminal Court.

He is 75-year-old Laurent Gbagbo, whose bid to cling to power after being defeated at the ballot box by Ouattara in 2010 unleashed a war that claimed several thousand lives.

Among younger political figures, two -- Pascal Affi N'Guessan, 67, and Kouadio Konan Bertin, 51 -- have been authorised to take part in the elections but are considered to have negligible success.

President Alassane Ouattara had promised earlier this year to step down and hand on to a "new generation". By Ludovic MARIN (AFP/File)

Two contemporaries are former rebel chief and ex-premier Guillaume Soro, aged 48, who has been barred from taking part because of a conviction, and former youth leader Charles Ble Goude, also 48, who has signalled that he will make his tilt for office at a future election.

The image of a young country ruled by an old man was one that Ouattara himself ostensibly tried to avoid.

Earlier this year, he promised to step down after a decade in power and hand on to a "new generation".

Ouattara then decided to bid for a third term, defying accusations that he was only able to do so by tinkering with two-term constitutional limits.

'They don't give a damn'

In a country where there is a dread of a return to the turmoil of 2010-11, there is also profound disaffection with politics, said Rodrigue Kone, a sociologist and political analyst.

"A great part of the population is tired of seeing the same old play with the same actors, with the same squabbling and acts of revenge," he said.

In daily life in Ivory Coast, many conversations about politics have this phrase, or a variation of it: "Why bother to vote? They don't give a damn about us!"

"There is a crisis of trust between young people and politicians," said Alexandre Amani, the local coordinator of a pan-African movement, Tournons la Page (Let's Turn the Page), which is campaigning for change and basic freedoms.

Ageing rulers are a common phenomenon south of the Sahara.

Elsewhere in West Africa, Guinean President Alpha Conde has just been declared re-elected at the age of 82, while in Nigeria, President Muhammadu Buhari, 77, is facing a wave of youth anger, driven by corruption.

In Ivory Coast, poverty, which afflicts nearly 40 percent of the 25 million people, provides a deep well of disillusionment.

"Many highly-qualified young people are unemployed or have to do low-paid work to survive, like selling food or hawking goods," said Saturnien Ekra, head of a small campaign group in Abidjan called Action pour la Paix (Action for Peace).

Kone said a breakthrough by independent candidates in local elections in 2018 demonstrated the voters' "thirst for the renewal of the political class."

But, in Ivory Coast as elsewhere in Africa, spontaneous change in favour of younger, brasher leaders is a most unlikely scenario.

Ouattara supporters at a rally outside of Abidjan. In Ivory Coast as elsewhere in Africa, spontaneous change in favour of younger, brasher leaders is a most unlikely scenario. By Issouf SANOGO (AFP/File)

"In our societies, having an old man in power is a sign of wisdom," said political scholar Modeste Koffi Goran.

"What's the point of having a young president?" was how fellow political analyst Jules Toa Evariste framed the question.

"Age is an asset," octogenarian presidential contender Bedie told reporters in July. "Age brings together experience as well as competence."