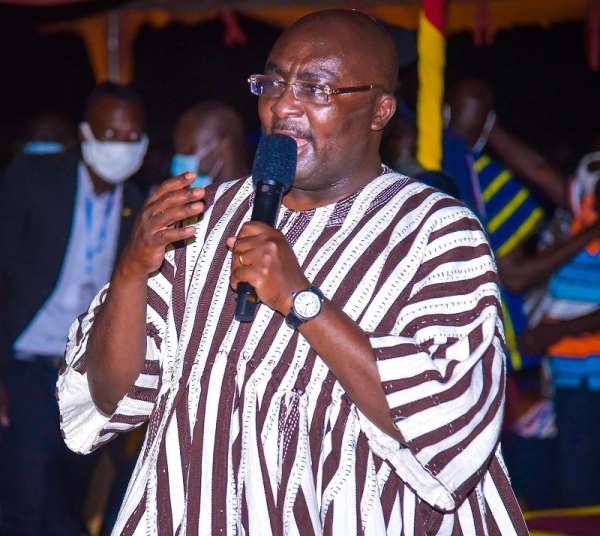 Vice-President Dr Mahamudu Bawumia has said former President John Mahama has been “inconsistent” with his flip-flopping campaign promises and cannot be trusted because he is just making them for votes.

According to him, the main opposition National Democratic Congress’ People’s Manifesto can also be likened to a naked man promising another man clothing.

“If you’re a leader without principles and you keep saying everything just for votes, then you can’t be trusted because it’s all for votes”, President Nana Akufo-Addo’s four-time running mate said.

“I call their manifesto ‘Kwatrikwa manifesto’. There’s a local adage that says: ‘If a naked man promises you a cloth, pay attention to his name’. What were they able to achieve in office?” he inquired.

In Dr Bawumia’s view, if Mr Mahama could scrap teacher licensure exam during his presidency, then he sure will scrap the Free Senior High School programme should he win the 7 December 2020 polls.

“You canceled teacher trainee allowance and you want me to trust you with Free SHS? Then definitely, you would cancel that, too, so, we won’t entrust Free SHS into his hands”, he said.

Mr Mahama, according to Dr Bawumia, “is very inconsistent”.

“What I want the people of Techiman and the whole of the Bono East Region to know is that: we are moving forward; don’t let us go backwards.

“We were in hardship under Mr Mahama but are gradually easing out of it into a time of plenty, so, we shouldn’t return to the days of hardship because the plan of President Nana Akufo-Addo is to move the country forward”, he said.

Dr Bawumia, who was touring the Bono East Region, said: “A lot of the things he [President Akufo-Addo] is doing are unprecedented”.

“So, we are now in first gear and want to go into second gear in 2021 for the car to move forward even faster, so, all of you should support President Nana Addo Dankwa Akufo-Addo and the parliamentary candidates of the New Patriotic Party (NPP). We don’t want ‘skirt and blouse’, we want straight victory and I believe Bono East will see more development if you vote for us for a second term”, Dr Bawumia said.