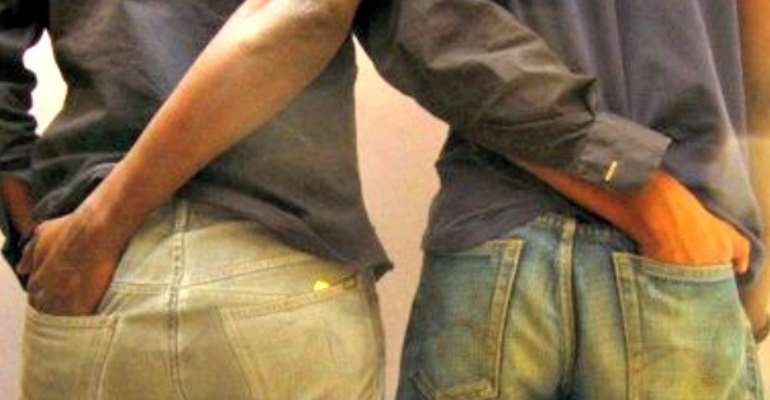 A Nima based vigilante group, The Safety Empire has vowed to crush homosexuality in Ghana with a 'sledgehammer.'

The community watchdog group known and feared within Accra and its environs for its violent clamps on LGBTQ persons and supporters stated that the war on homosexuality is not over until all persons who engage in the act captured and punished.

The group led by its leader Sulley Fuseni on Saturday brought the Abelenkpe in Accra to a standstill when they stormed the area in search of one Adam Alhassan, a suspected gay person.

According to an eye witness, members of the group numbering about 25, wielded machetes, stones and sticks when they stormed the area.

The eye witness who spoke on the condition of anonymity told this reporter that although the group were unable to find the suspect, they threatened residents in the area as well as occupants of the house they visited.

The source pointed out that the said Adam Alhassan was living at Nima before he relocated to Aladjo with his family after people started suspecting his secret flirting with homosexuals.

In a telephone interview with Sulley Fuseni, he confirmed the incident at Abelenkpe and added that their target was Adam Alhassan, a fashion designer who engages the services of homosexual persons.

The group leader further explained that Adam Alhassan, although not a gay practitioner, but associates himself with gays and lesbians in his line of business and has refused to disassociate himself from such persons hence incurring their wrath.

On why the attack, Sulley Fuseni popularly known as Ras Doya said they received a tip-off that Adam Alhassan who has been living in the USA was repatriated back to Ghana and was hiding at Abelenkpe.

He said, the one who gave us the tip off claimed to be a relative to Adam Alhassan but refused to mention his real name.

"He has been on our wanted list for long and we had wanted to arrest and punish him for his association with homosexual practitioners when we heard that he was in town."

On what next since they didn't find him, he said they will continue to monitor and be visiting the area and other places until he is caught and brought to book. "We want to make Ghana a hell for gay practitioners and their supporters."

He further described LGBT as satanic and alien to the African society and must therefore not be allowed to gain momentum in Ghana.

Homosexuality, he stressed must not be allowed to have a place in Ghana, "if we do not want God's anger on us we must flush such persons out."

To further ascertain the facts of the story, this reporter managed to get in touch with the mother of the said Adam Alhassan.

The worried mother, Madam Abiba Issaka confirmed that members of the group visited her house to enquire about her son, who is currently residing in the United States.

According to her, she was surprised at the visit by the group indicating that her son who was a tailor by profession fled Ghana since 2015 due to harassment by the same group and had never returned to Ghana.

"So I was very much surprised and terrified by the manner in which they entered our compound wielding offensive weapons," she noted.

According to her, she suspects Alhassan Adam's paternal uncle by name Abdulai Kambala, to be the one behind the latest attack. "I am sure he was the one because he has been against my son from day one and had once promised to teach him a bitter lesson."

On whether her son was a gay person before he fled Ghana, the sorrowful Madam Abiba Issaka pointed out that her son was never a gay as he was married here with a son before his troubles started leading to his fleeing.

"All that they accused my son of, was that he engages with gays and lesbians who happened to be part of his many clientele. He was warned to desist from associating with them, which he didn't, thereby causing him the anger of the group and the community leaders.

"I relocated from Nima to Aladjo and to Abelenkpe, just to avoid troubles of the people but today's attack shows that I and my family are still not safe," Madam Abiba Issaka averred.