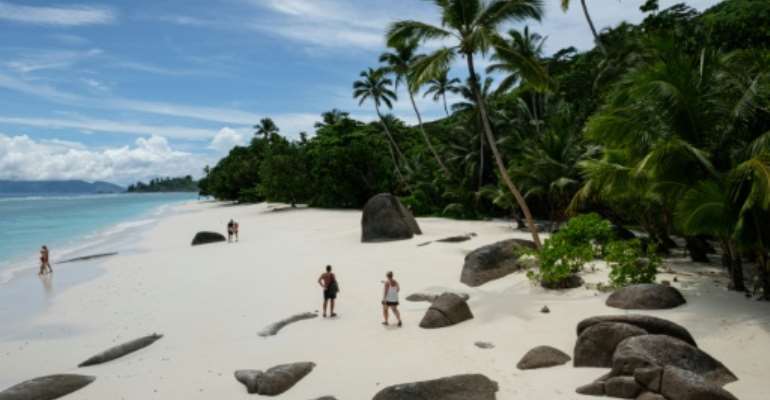 Most of the Indian Ocean islands making up the Seychelles, a prized honeymoon destination, are uninhabited. By Yasuyoshi CHIBA (AFP/File)

The Seychelles on Thursday kicks off a three-day election for the president and lawmakers, with voting to be spread out across the 115 scattered islands making up the idyllic archipelago.

Narrowly defeated in a presidential election in 2015, and buoyed by a landmark victory in a parliamentary poll a year later, the opposition is hoping for its first ever presidential win.

However the main opposition parties did not manage to unite and President Danny Faure -- who was not elected but took over after his predecessor James Michel resigned -- is running against two candidates.

Most of the Indian Ocean islands making up the Seychelles, a prized honeymoon destination famed for white beaches and lush vegetation, are uninhabited and the archipelago's 98,000 residents mainly live on the islands of Mahe, Praslin and La Digue.

Voting on these islands will take place on Saturday from 7 am to 7 pm.

On Thursday and Friday, it will be the few hundred voters from a dozen islands -- mainly employees of hotels or the company managing protected areas -- who will cast their ballots in mostly pop-up polling stations carried by plane to each island.

Faure's main rival is the Anglican priest Wavel Ramkalawan, who is taking his sixth shot at the presidency and lost by only 193 votes to Michel in an unprecedented second round of voting in 2015.

He is the candidate of the Linyon Democratik Seselwa (Seychelles Democratic Alliance) opposition party, the majority party in parliament after winning 19 of 34 seats in the last election.

The other candidate is Alain St Ange, who was in the opposition before joining the government tourism minister between 2012 and 2016.

He has now switched back and is running for the One Seychelles party which he created a year ago, but could pay the price for crossing over to the opposition.

Meanwhile Faure is running under the recently renamed United Seychelles ruling party which has been in power since 1977.

The main concern of voters is the economic situation in the country, which has suffered the loss of vital tourism -- its main earner -- due to the coronavirus pandemic.

The Seychelles has only recorded 149 mostly imported cases, but the virus has been a key campaign issue, with the health minister banning election rallies which would be a litmus test of support for various candidates in a country without a polling institute.

The campaign has mainly taken place over social media, where the opposition and its supporters are the most active, and on television where the country held its first ever debates between the candidates, which proved extremely popular.

Since the start of the pandemic, the economy has slowed significantly, with some 700 Seychellois losing their jobs, according to government figures.

And while average income is among the highest in Africa, the national statistics agency says that about 40 percent of Seychellois live in poverty as a result of the high cost of living.

Another key theme of the campaign has been corruption, a largely taboo topic in the tiny country where everyone knows everyone and business and politics are often intertwined.

The Seychelles is classed by Transparency International as being perceived as the least corrupt country in Africa and among the 30 least corrupt in the world.

However it is also a tax paradise housing numerous offshore companies.

An anti-corruption commission created in 2016 is still probing the disappearance of a $50 million (42 million euro) donation from the United Arab Emirates 18 years ago, but its slowness and lack of resources have been criticised.

By proposing the legalisation of cannabis -- which Faure opposes -- One Seychelles has also put drugs at the heart of the campaign, in a country which has the world's highest rates of heroin addiction.

The government has put in place a widely supported system of methadone distribution and has poured money into drug prevention and rehabilitation programmes.