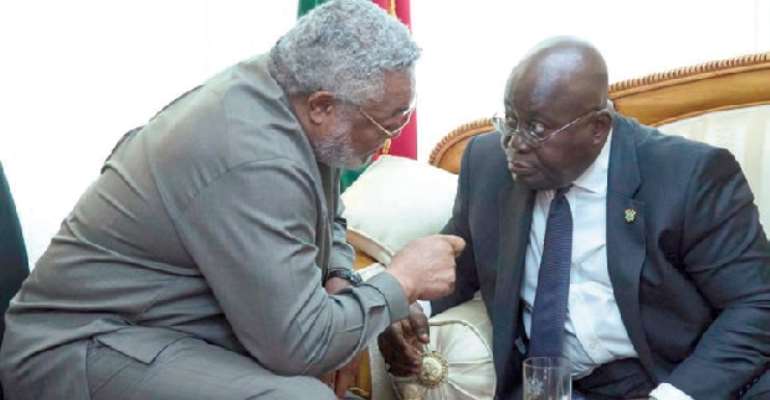 The late Madam Agbotsui died at the age of 101 on September 24, a week after her birthday.

She is set to be buried on Saturday at Dzelukope in the Volta Region.

The President is expected to attend the funeral which will take place at the forecourt of the State House in Accra.

This came to light on Monday when family members of the late Madam Agbotsui called on the President at the Jubilee House on Monday to inform him of arrangements for the funeral.

They were led by Executioner of the Anlo State, who is a former Member of Parliament (MP) for Keta, Dan Abodakpi, who said the family has decided to organise the entire funeral and burial in a day starting with the filing past at the forecourt of the State House.

President Akufo-Addo expressed condolences to the bereaved family, especially to Mr. Rawlings, and assured them of government's support for the funeral.

Also at the Jubilee House were the chiefs and people of Japekrom-Drobo in the Bono Region.

The case, according to the Omanhene of Japekrom, travelled from the High Court through to the Supreme Court and that the Drobo Stool lost all the cases from High Court to the Supreme Court with the apex court dismissing an appeal by the chiefs and people of Drobo, affirming the orders of the Court of Appeal which sat on the case in Kumasi on July 27, 2012.

“The Drobohene, his elders and subjects have vehemently refused to adhere to the court orders leading to the disturbance of peace in the area. This is the source of the insecurity in the area resulting in the massacre of October 17, 2018. We wish to bring to the attention of the President that there has never been a chieftaincy dispute between Japekrom and Drobo, as the two are separate traditional areas. The land litigation has also been settled by the judgment of the Supreme Court of November 19, 2015. The issue at stake therefore is solely on the implementation of the Court’s orders and in this we seek the President’s assistance to ensure lasting peace in the area,” the Omanhene of Japekrom said.

President Akufo-Addo said he was pleased with the reconciliatory tone of the submission of the Omanhene of Japekrom and the quest to achieve lasting peace in their area.

He further noted that for the Supreme Court to deliver a decision on the land dispute means that finality has been brought to the matter, with a pledge of his government's commitment to give the Omanhene's request the adequate attention to resolve the impasse.