Why Is NAM1 Free But Menzgolders Being Harassed By Police? – Mahama 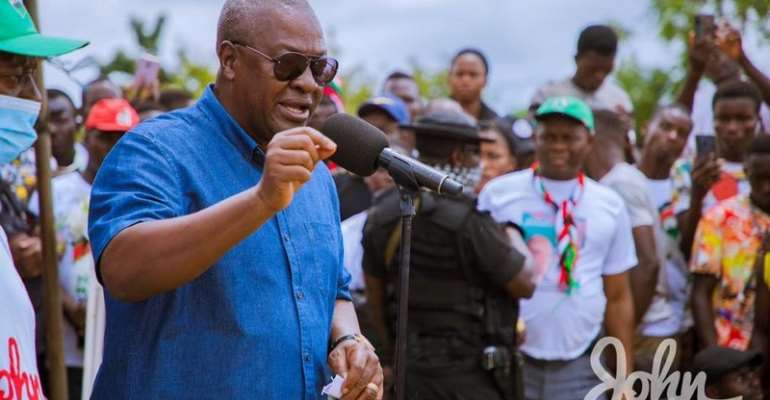 Mr Mahama is wondering why the CEO of the company Nana Appiah Mensah aka NAM1 and his Directors are walking freely but innocent Menzgold demonstrators are being harassed by the Police.

Speaking to party supporters at Tarkwa constituency campaign launch in the Western region on Tuesday, 20 October 2020, Mr Mahama said: “This Menzgold matter is not of concern to this government because we can’t see what they are doing about it.

“The person behind this scam walking freely but the Police is quick to go after the innocent customers who are demonstrating for their monies.

When the customers decide to demonstrate, they are beaten by the police and some arrested but by God’s grace, the NDC will come back to power. The next NDC government will probe this Menzgold saga and those who took your monies, we will take it from them and give it back to you.

“Every property they’ve hidden, we’ll look for them, confiscate them and refund your money.

This government knows the directors, and the owner of Menzgold so why are they walking freely? It is not right.”

The Securities and Exchange Commission (SEC) ordered the shutdown of the gold-trading firm across the country on Thursday, 12 September 2019.

It also stopped the company from taking on new investments.

SEC further stopped Menzgold from publishing or broadcasting all adverts related to its activities.

SEC indicated that upon evaluation of the documentations of Menzgold, the company did not have the licence to deal in gold-trading, citing that its operations breached Act 929 and as well, posed “a threat to unsuspecting and uninformed investors”.

SEC had further warned in a notice on Saturday, 7 September 2019, that if the company failed to comply, the Commission enforce the directive by taking “measures under the law.”

Unable to refund customers investment NAM 1 has been dragged to court.

The Circuit Court in Accra presided over by Her Honour Ellen Asamoah on September 7 adjourned his case to October 1, 2020.

The State had previously on June 24, 2020, filed new charges against him at the Accra Circuit Court.

Assistant Superintendent of Police (ASP) Sylvester Asare then told the Court that his directives were that he should hold on to the new charges and the plea taking of the accused.

On July 20, ASP Asare told the court that, they were seriously working to advise the court on the matter.

To this end, he prayed the court for a long adjournment after which they would have been able to advise the court on their intention of prosecution on the matter.