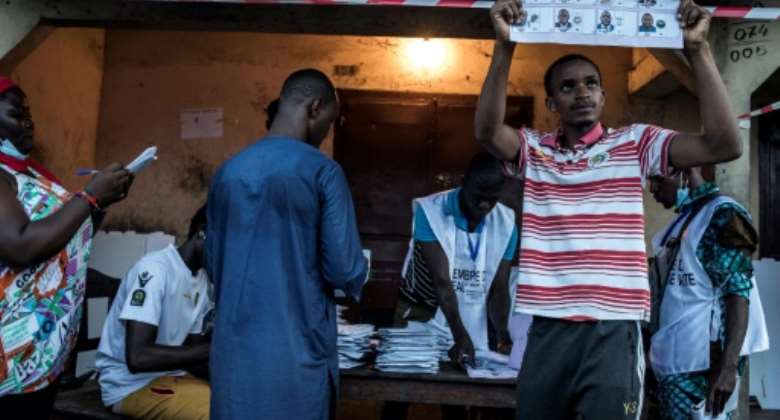 Fears of an electoral dispute are growing in Guinea, one day after a tense presidential vote, as the opposition has said it will publish its own vote results, ignoring the official tally.

Guineans voted Sunday in a poll in which incumbent President Alpha Conde is seeking a third term, following months of protests against the move during which security forces killed dozens of people.

Polling day in the poor West African nation was calm, despite fears of violence after recent clashes between supporters of 82-year-old Conde and his main rival Cellou Dalein Diallo, 68.

Twelve candidates are contesting the presidency, including the frontrunners Conde and Diallo.

But fresh tensions have arisen over an apparent warning from Diallo, who leads the opposition UFDG party, that his activists will declare the outcome of the election themselves.

"Polling stations display the results by polling station. From the moment they are displayed, it is a public result. So the UFDG will publish the results," said Ousmane Gaoual Diallo, a UFDG party cadre.

Opposition members are deeply suspicious of the fairness of Sunday's poll, as well as the independence of Guinea's electoral authority.

Diallo told reporters on Sunday that his rival may "cheat" -- which prompted Guinea's security minister to fire back that he should "return to his senses".

By Sunday evening, partial results began to filter online and Diallo supporters rallied in some suburbs of the capital Conakry to celebrate his purported victory.

On Monday, Guinea's government said in a statement that "this strategy of forced, premature and unjustified celebration was meticulously planned."

The move is "clearly intended to create chaos and to call into question the real results that will come out of the ballot box," the government said.

Much of the tension in Guinea relates to President Conde's controversial bid for a third term.

He pushed through a new constitution in March which he argued would modernise the country. But it also allowed him to bypass a two-term limit for presidents, provoking mass protests.

After decades as an opposition activist, Conde became Guinea's first democratically elected president in 2010 and won again in 2015, but rights groups now accuse him of veering towards authoritarianism.

Diallo, 68, was formerly a prime minister under authoritarian leader Lansana Conte. He unsuccessfully challenged Conde in both 2010 and 2015.

Before vote counting began on Sunday, Diallo's activists said their observers had been obstructed at polling stations and decried ballot-box stuffing.

A second round of voting, if needed, is scheduled for November 24. By JOHN WESSELS (AFP)

In a sign of possible backlash, Guinea's communications regulator has suspended a leading online news source for broadcasting vote-counting on social media and on television.

Prime Minister Kassory Fofana said that the opposition publishing results ahead of the official electoral authority was tantamount to pouring "oil on the fire".

He added that official results are expected within a week, but UFDG activists have said they may declare a winner themselves sooner.

"If we are the winners, we will defend our victory," said Ousmane Gaoual Diallo, from the UFDG party. "We won't wait".

Guinea's acrimonious political campaign saw Conde and Diallo trade insults, and was marked by violent incidents in some parts of the former French colony.

But it also raised the spectre of ethnic strife, with Conde accused of exploiting divisions for electoral ends -- a charge he denies.

Your exceptional leadership in West Africa appreciated by US...
21 minutes ago