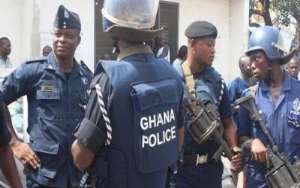 Residents of Gbefi in the Kpando Municipality of the Volta Region have allegedly attacked police officers from the Kpando Command and freed a suspect who was picked up to assist in investigations in a threat of murder case.

The incident according to Citi News sources allegedly occurred in the presence of the Chief of the area, DSP Hilarious Avornyo who doubles as the Commander of the Anfoega District of the Ghana Police Service.

According to Citi News Sources in the area, an indigene of Gbefi who is a resident abroad reported to the police on Sunday morning about a threat of murder made on his life by the Asafoatse [Asafoatse Agulo] of Gbefi over a piece of land which the complainant claimed was being used for the cultivation of marijuana.

Eight police officers from the Kpando command who managed to arrest the suspect after giving him a hot chase were allegedly attacked by residents numbering about 400.

The mob allegedly attacked the police officers and seized a Tecno phone belonging to one of the officers.

The residents also forcefully took custody of the suspect who was handcuffed by the police officers.

DSP Avornyo told Citi News he was at the scene but will only speak to the media with authorization from the Volta Regional Police Command.