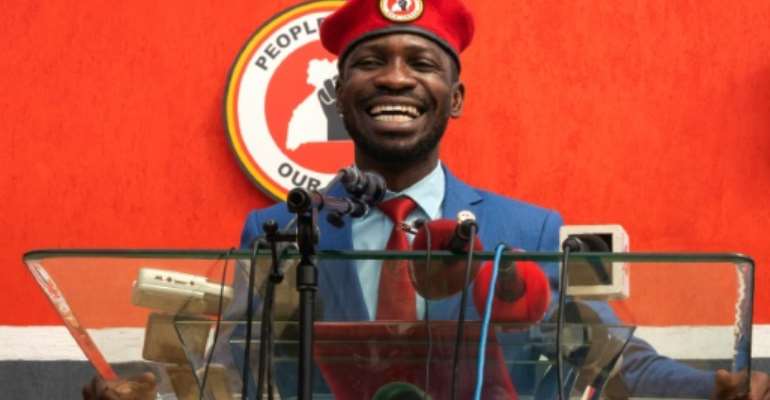 Ugandan security forces detained pop star-turned-politician Bobi Wine on Wednesday during a raid of the presidential aspirant's offices in the capital Kampala, his lawyer said.

An opposition MP whose real name is Robert Kyagulanyi, Wine has previously been arrested numerous times as he has rattled the ruling party of President Yoweri Museveni, who has ruled the East African nation since 1986.

Wine's lawyer Anthony Wameli said his client was seized on Wednesday at the offices of his opposition party, the National Unity Platform.

"The police and the army raided the office of NUP, sealed off the premises and all the roads leading to the place before detaining Bobi Wine and other party officials," Wameli told AFP.

"This is despicable and an attack on democracy by the partisan police and the army," he said. The reason for the raid was unknown but "politics cannot be ruled out", he added.

Earlier in the day, Wine tweeted that the police and military had "broken into offices and taken away valuable documents".

"The partisanship of security agencies ahead of the election is stinking," he said, adding that "some comrades have been injured".

"Our officers have deployed at the premises. Details of the operation will be given later," he added, refusing to comment on the reports that Wine had been detained.

The media was kept away from the NUP's offices and surrounding streets on Wednesday, but armed officers could be seen through the window, according to an AFP journalist.

Wine, 38, has become a popular figure among the youth in a country where the median age is less than 16.

After nearly a quarter century in power, the 76-year-old Museveni is the only president most have known.

But since becoming an MP in 2017, Wine has been routinely arrested and put under house arrest, his concerts banned and public rallies dispersed with teargas.

Museveni, one of Africa's longest-serving rulers, had the constitution amended for a second time to allow him to run a sixth time in 2021.