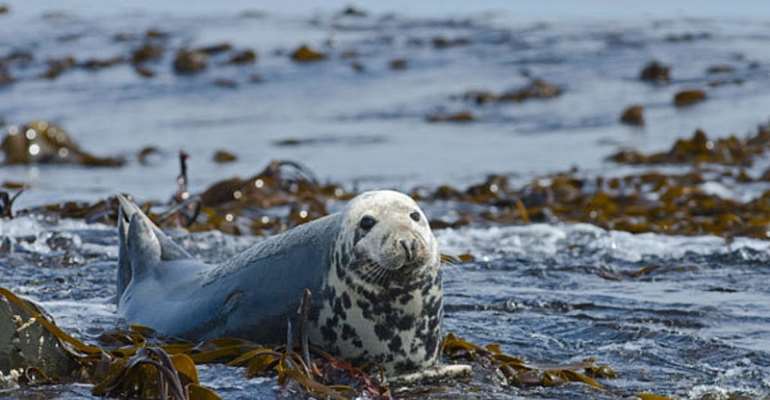 A fisherman facing charges for decapitating a seal has appeared with his former captain in a courthouse in western France. Prosecutors sought fines for each man in a case that plaintiffs say underlines a wider problem of fishing in waters with protected species.

The fisherman, 37, and his former captain, 48, stated their cases in a court in Quimper near the western tip of Brittany on Monday in a case that began with the discovery of a severed seal's head in February 2019.

Authorities opened an investigation after finding the head suspended by fishing ropes near the seawall near Concarneau, a port city whose medieval walled town is popular with tourists.

Two weeks later, a civilian walking on a nearby beach found the rest of the remains of the animal. A second decapitated seal was found on the same beach days later.

News of the incidents spread. In April 2019, the gendarmerie police force launched a call for witnesses, and the French office of environmental protection group Sea Shepherd offered a 10,000-euro reward for information leading to the identification of who was responsible.

In early May, investigators detained a man who had reportedly shown the head of the seal to acquaintances.

During the hearing, the fisherman explained having found a dozen seals caught in fishing nets over the course of two months and, believing they were dead, decided to turn a head into a trophy.

“After the ninth seal, I asked my captain's permission to take the head and have it stuffed,” the man told the court according to regional newspaper Le Télégramme.

“I decapitated the dead seal and left the head at the seawall at Concarneau so the crabs and fish could clean it. The head disappeared, so I decapitated another dead seal, again in front of the captain. I didn't know it was forbidden.”

Investigators had found a skull in his home in Concarneau, suspended as hunters display heads of deer.

“I am a Parisian and had never seen a seal,” the man told the judge when asked why he wanted a trophy. “I wanted a souvenir, to pay tribute to it.”

Asked by plaintiffs about text messages that put into doubt whether the seals were dead, the fisherman insisted he was certain: “I love animals,” he told the court. “I even tamed a seagull.”

“We find it's not enough, considering what the law says,” regrets Essemlali. “There's a sense of impunity among certain fishers who capture protected species, sometimes on purpose. We don't know if that's the case here, even though the decapitation is clearly voluntary.”

For Sea Shepherd, one of 10 environmental and animal protection groups that were plaintiffs in the case, the decapitations underline inconsistencies in current laws about fishing and protected species including seals and dolphins.

“This fishing boat killed 12 seals in three months without making a sole declaration, and this is what threatens the survival of sea mammals today,” says Essemlali, who likens the laws on declaring to “asking drivers to report when they break the speed limit, without radars or patrol cars”.

The ocean protection group's recommendation is better surveillance of what happens on fishing vessels.

The court in Quimper set 26 November as the date for reading a verdict in the decapitation case.