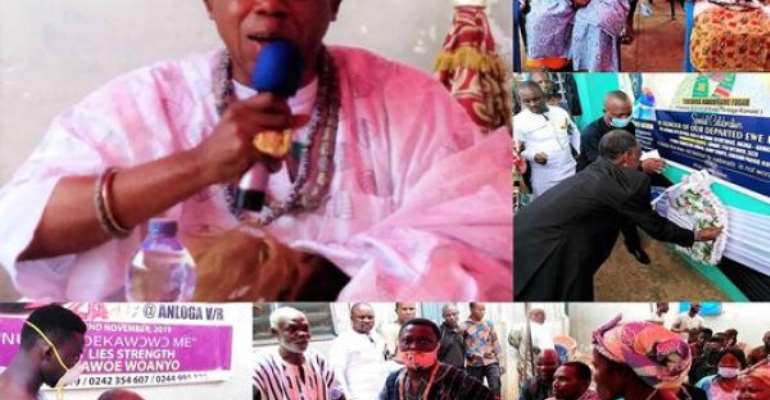 The Ewe Community in the Ashanti, Ahafo and Bono-East Regions, has condemned the demand and agitations by a Group fighting for an independent state, Western Togoland.

“Those secessionist sentiments are uncalled for and also unnecessary, Torgbiga Mawufeame Fugah, the President, told a meeting of the Community at Anloga in the Oforikrom Municipality of the Ashanti Region.

Given the historical antecedents to how Ghana's independence was fostered through unity and diversity of purpose, he said the separatist group was not acting in circumspection and “we think the agitation to break away has no merit.”

Ghana has recently seen a wave of protests by the separatist group, demanding autonomy of the Western Togoland amid the destruction to state property and other atrocities.

He admonished members of the Community to always strive to bring their expertise and knowledge to bear for the nation's progress.

“The Ewe Community in the three Regions does not support the demand for an independent Western Togoland - an area that covers the entire Volta and Oti Regions of Ghana,” the President stated, and emphasized the need for unity in diversity at all times.

Ghana's security forces as part of investigations rounded up more than 30 suspects believed to be members of the separatist group.

Some assault rifles looted by the group in one of their recent escapades were also retrieved by the police.

The Foundation has over the years been agitating for an independent Western Togoland, claiming that the Volta Region does not fall within former Gold Coast borders, now modern-day Ghana.

At the height of its violent protests recently, the separatist group captured three personnel of the Ghana Police Service, including the Commander of the Sogakope Command after attacking the Aveyime and Mepe Police Stations.

According to the Foundation, the Western Togoland was an independent state before it was forced to join Ghana after the 1956 plebiscite.

Torgbiga Fugah commended the government for dealing promptly with those agitations, saying the Ewe Community would continue to give its backing to efforts to suppress any insurrection that had the potential to create unnecessary tension in the country.

The meeting had in attendance Nana Offei Asamani, Chief of Salo in the Volta Region, who is also the Nkosuohene of Akwamu.

The Special Guest of Honour, in a brief message, also condemned in no uncertain terms recent disturbances by the Homeland Study Group Foundation, describing its call for an independent Western Togoland as baseless.

The meeting was designed, amongst others, to address issues relating to the growth of the Ewe Community, and members' contribution to the sustainable development of the country in general.

The occasion was used to also remember fallen heroes of the Community, and how they contributed to building a unified modern-day Ghana, as they lit symbolic candles in honour of the departed souls.