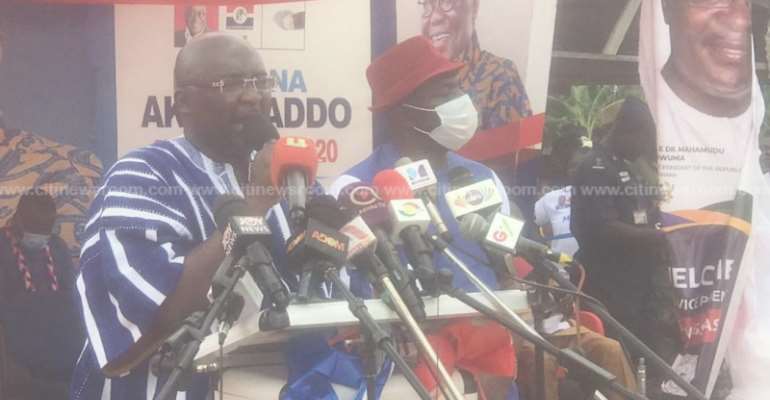 According to him, the policy has shown that farmers could increase their cocoa yield from two to ten bags per acre of land.

The Vice President said this at a durbar of chiefs and people of Wassa Atobiase in the Wassa East constituency as part of his two-day tour of the Western Region.

Dr. Bawumia explained that the results of the policy follow government's investment in the cocoa sector to boost the earning of farmers.

“We have also made fertilizer generally available for farmers which we can confirm that it is Wassa Atobiase here that you received the first batch of the nationwide supply of fertilizer. The increase in the supply of fertilizer is helping farmers. We have introduced so many measures in the cocoa industry led by the COCOBOD. Right now, the living income differential has raised the cocoa price as high as GHS660 per bag. We are doing pruning and hand pollination too for farmers,” the Vice President said.

“Previously we were getting two bags per acre but thankfully, the pilot of a policy we are coming to soon introduce shows that we can get ten bags of cocoa per acre. This all shows the new thinking the NPP government has introduced.”

The Chief Executive of the COCOBOD, Boahene Aidoo, who is accompanying the Vice President on his two-day tour assured cocoa farmers that government has made adequate funds available to pay for all diseased cocoa farms that have to be cut down and also compensate for cocoa trees and land.

The Vice President as part of his two-day tour of the Western Region will meet chiefs and people of Sameyi and a settler community at Elubo in the Jomoro constituency.

He will also perform a sod-cutting ceremony for LPG bottling plant at Akyirim at Axim in the Evalue-Gwira constituency.

Dr. Bawumia's last day of the tour will see him attend a durbar of chiefs and people of Prestea Nkwanta, inspect the Sureso to Samanoy road in the Amenfi East, meet settlers and commission an Islamic JHS at Manso Amenfi in the Amenfi Central.