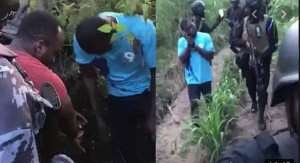 A man suspected to be a member of the secessionist group led the police to retrieves guns his members stole from the two police stations in their recent attack in the Volta Region.

The Police were led to the area in the bush where the weapons had been buried.

In a video that popped up on social media, the man is seen digging out a number of rifles covered in black polythene bag from the hideout.