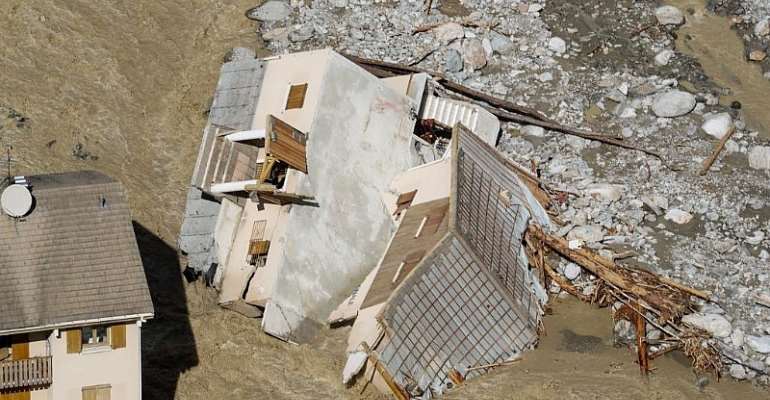 French President Emmanuel Macron is this week expected to visit the Alpes-Maritimes region in southern France which has been devastated by floods. Torrential rain and flash floods battered the area bordering Italy on Friday, killing at least four people and causing widespread damage. Rescue efforts have been stepped up to find nearly two dozen missing people.

"President Emmanuel Macron told me that he is coming to the Alpes-Maritimes. I salute his commitment to our department and our stricken valleys," Eric Ciotti, who is the Member of Parliament from the region, wrote on Twitter.

French and Italian rescue services stepped up search efforts on Sunday, estimating that around 20 people were still missing.

According to media reports, emergency services recovered at least four bodies on the Mediterranean coast of Liguria in Italy.

Rescue efforts were concentrated on the Roya valley where roughly 1,000 firefighters, backed by helicopters and the army, resumed their search for survivors and helped people whose homes were destroyed or inaccessible.

Hundreds rescued
Emergency services have managed to rescue some 560 habitants, and 150 are still waiting to be evacuated.

In the village Breil-sur-Roya, houses were buried in mud and turned-over cars were stuck in the riverbed.

The floods were caused by storm Alex which hit France's west coast on Thursday, before moving to southern France and northern Italy.

"What we are going through is extraordinary," said Bernard Gonzalez, prefect of the Alpes-Maritimes region, after as much as 60 centimetres (two feet) of rain fell in 24 hours in the worst-affected areas.

France declares disaster zone
Italy confirmed two people died Saturday, a volunteer firefighter on a rescue operation and a man whose car was washed away.

France also announced two fatalities.
The first found was a shepherd whose body was pulled from a river near the border. Firefighters later announced a man had been found dead in his car in the southeastern village of Saint-Martin-Vesubie.

France has declared the region a natural disaster zone.