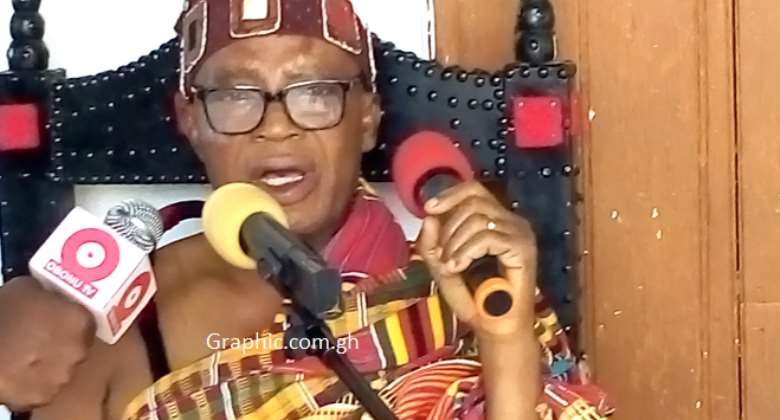 A sub-Chief of the Osudoku Traditional Area in the Shai-Osudoku District in the Greater Accra Region has been picked up by the Bureau of National Investigations (BNI) for his alleged involvement in the activities of the secessionist group in parts of the Volta Region.

The Head of the Dorsi Clan/Division, Nene Tawiah Agblom II, was reportedly picked up from his home over the weekend.

The Akuse Divisional Police Commander, Chief Superintendent Winfred Asare Nyarko, confirmed the arrest to the Daily Graphic but would not give any further details.

The traditional council, in reaction to the incident, has dissociated itself from Nene Agblom’s activities, stressing that whatever he had done was not done on behalf of the council.

The Paramount Chief of the Osudoku Traditional Area, Aadegbor Ngmongmowuyaa Nene Kwesi Animle VI, in a statement issued to the media at Osuwem, the traditional capital of the Osudokus, yesterday, made it clear that his traditional area had nothing to do with the Western Togoland secessionists.

“This press statement has become necessary and appropriate because information reaching me, which has been confirmed when I sent an emissary to follow up to Accra, indicates that one of our chiefs, Nene Tawiah Agblom II, the Head of the Dorsi Clan/Division, has been picked up by the authorities for involving himself in the activities of the Western Togoland secession.

“Considering his position and relationship with me as the Paramount Chief and the entire people of the Osudoku State, it became expedient to come out to disassociate myself and the traditional council and area completely from this diabolic agenda.

“I also unequivocally condemn the move without any reservation whatsoever,” the statement emphasised.

It explained that where there were misunderstandings and chaos, there was no development, adding that the people of Osudoku wanted development for their area and, therefore, would not be part of people who were fomenting trouble in the country.

“We are highly surprised at our chief’s involvement in this heinous crime,” it added.

“I also wish to warn the chiefs and the people of the Osudoku Traditional Area, especially the youth, that nobody should get himself/herself involved in this unacceptable venture, and that anybody who does so does that at his or her own risk. I hereby urge the security agencies to be always alert, as they are doing now, and do their work without fear or favour, in spite of the one who would be found in this criminal activity,” the statement added.

It emphasised that the traditional area would never support such an exercise which threatened the security of the area and Ghana as a whole.

Hottest Photo Reports
Catch up with all the political quotes from our politicians.
Advertise here
More from Headlines
ModernGhana Links
No appointee shares his/her payslip, so proposed salaries cut by 30% problematic, doubtful – Gyampo
Government's minor austerity interventions are like cottons thrown at the elephant – Prof. Gyampo
There will be more industrial actions until labor also lives in opulence like the politician – Prof. Gyampo
TOP STORIES