By Samir TOUNSI with Robin MILLARD in Geneva 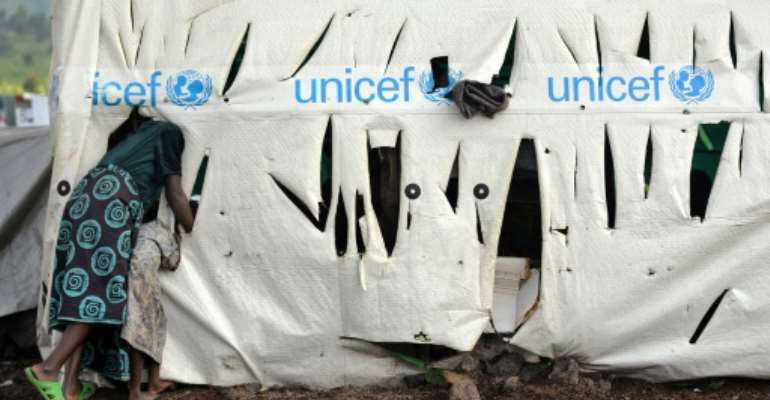 The UN Children's Fund UNICEF is among the agencies accused. By TONY KARUMBA (AFP/File)

The humanitarian world has pledged to combat the scourge of sexual abuse within its ranks following shock revelations of alleged exploitation in the Democratic Republic of Congo.

In a report published this week, more than 50 women levelled accusations against aid workers from the World Health Organization (WHO), other UN agencies and major non-governmental organisations during the 2018-2020 Ebola crisis in the volatile eastern DR Congo.

A year-long investigation by the Thomson Reuters Foundation and The New Humanitarian contained allegations of sexual exploitation, including propositioning women, forcing them to have sex in exchange for a job, or terminating contracts when they refused.

"The largest number of accusations -- made by 30 women -- involved men who identified themselves as being with the WHO," the report said.

The WHO insisted Friday it was taking the "horrific" allegations "deadly seriously" and had launched an investigation.

The other UN agencies accused -- the International Organization for Migration and the UN Children's Fund UNICEF -- plus NGOs cited have done likewise.

'Of a certain morality'

The Congolese authorities and civil society have joined the chorus of outrage.

In a report published this week, more than 50 women levelled accusations against aid workers from the World Health Organization (WHO), other UN agencies and major non-governmental organisations. By Fabrice COFFRINI (AFP/File)

"On behalf of the government, I condemn this kind of attitude," said government spokesman David Jolino Makelele.

"We are going to strengthen our control over these kinds of missions," he told Top Congo radio.

"We want them to send to us people of a certain morality."

"We have very courageous jurists and lawyers. I do not think they will back down in the face of international organisations," said the gynaecologist, who defends female victims of sexual violence.

The UN says it has learned from previous sexual abuse scandals, such as that involving peacekeepers in the Central African Republic in 2014 and 2015.

"We have now at the UN secretariat a database to which the agencies report in real time any abuse allegation," Alessandra Vellucci, spokeswoman for the UN in Geneva, told reporters on Friday.

Jens Laerke, spokesman for the UN Office for the Coordination of Humanitarian Affairs (OCHA), said the system to help people to come forward clearly "doesn't seem to have worked".

"It is very, very painful for everybody involved with the best intentions in humanitarian assistance to see these cases emerge," he said.

"No-one receiving humanitarian assistance anywhere in the world should ever be subjected to that."

A UN executive contacted by AFP said donors, OCHA, the main UN agencies and NGOs "should sit down together and say 'we have a serious problem here'."

"The humanitarian world has yet to confront the problem squarely," the official said.

The WHO played a leading role in the response to the 2018-2020 Ebola crisis, which was declared over on June 25.

Nearly 2,300 were killed -- the highest Ebola outbreak death toll in the DRC's history and the second-highest ever in the world.

WHO director-general Tedros Adhanom Ghebreyesus told a virtual press briefing in Geneva on Friday that he was "outraged" by the revelations.

"We come to save lives and spread hope. The betrayal of people in the communities we serve is reprehensible. We will not tolerate behaviour like this," he said, adding that perpetrators would face "serious consequences".

"Horrified but not surprised," a leading witness told AFP, on condition of anonymity, following the allegations in the report.

"All the ingredients came together," the witness said, citing concerns "from day one".

Among those ingredients was an influx of money and generally well-paid humanitarian workers into the poor region around the afflicted towns of Beni and Butembo.

A billion dollars poured in to tackle the outbreak, funding the activities of UN agencies and NGOs under the auspices of the DR Congo's health ministry.

For poor locals, the influx represented a rare chance to find decent work as drivers, security guards and housekeepers with the anti-Ebola response teams.

"We are here to look for a job, so that we can have something to eat," a woman called Salome told AFP in March 2019 as she waited with dozens of others outside an Ebola treatment centre in Butembo.