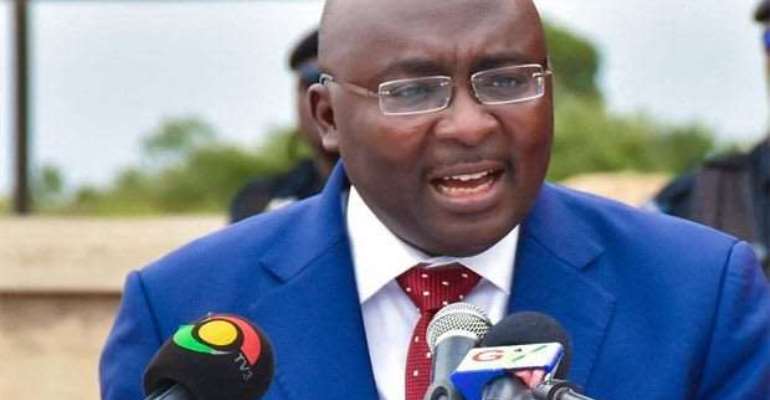 " Government has installed free WiFi in 80% of Senior High Schools". This is a quotation attributed to Dr Bawumiah, the Vice President of the Republic of Ghana on my joyonline.com on 30th September, 2020.

This claim we describe as ridiculous and misleading, to be charitable. This is because it is public knowledge that the total number of Senior High Schools in Ghana is 721.

Therefore, what this strange assertion by our Vice President means is that 80% of the 721 will give us close to 577 schools.

As an Educational Think Tank interested in promoting quality education in our country, we find the claim by our Veep as shocking and troubling knowing full well the state of internet connectivity in many of our secondary schools. So in order to either corroborate or deny the story based on empirical and verifiable evidence, we set out to investigate this claim. Our findings, having contacted our unimpeachable sources across the various senior high schools in the country, we wish to state unambiguously that, the claim by our Vice president is untrue, misleading and unfortunate.

Our checks reveal that the few schools that are connected to the Free WiFi were provided by their PTAs. What the government has provided in some of the schools across the country, according to our independent checks are less than half of the 80% that our Vice president claimed.

In fact, to further buttress our stance, we took a look at the government's own manifesto which was recently launched. In there, under education, they stated emphatically that they have awarded a contract to provide free WiFi connectivity to all 722 SHS,s , 46 Colleges of Education, 16 Regional Offices and 260 District Education Offices.

So it is shocking to hear from the Vice just few weeks after the launch claiming that 80% of the Senior High Schools are connected to the free WiFi. This is indeed misleading and unfortunate, coming from our Vice president.

As an Educational Think Tank interested in promoting quality education in the country, we are extremely gladdened to observe how much priorities both major political parties ie NDC and the NPP have placed on Technology in our educational set up having read their manifestos.

We believe strongly that this is the way to go if we are indeed committed to rubbing shoulders with the outside world as far as education is concerned.

However, what we will not accept is to allow our leaders to continuously pontificate about things they have not done with the view to either achieving cheap political points or to deliberately distort the facts just to mislead Ghanaians. This attitude must cease forthwith. Because if we leave this unacceptable posture by our leaders unchecked, it portends grave danger to our fledgeling democracy and more importantly our education. And this must not be countenanced.

This is the more reason we respectfully urge our Veep to try as much as possible to be fair to the facts. We recall his recent outburst claiming that the infamous legacy arrears legitimately owed teachers were cleared. This claim we all know have been ferociously and violently debunked by our Think tank with incontrovertible evidence and supported also by the teachers across the country with documented evidence. This eventually pushed many of them to few days ago threatened to go on demonstration but ended up petitioning the Director General of GES.

We think that, this unfortunate posture by our Veep does not speak well of his revered office and so must be checked. We advise that on issues conceding our education, he must double check his facts before making very loud pronouncements on them. This helps to raise his image and integrity as the second gentleman of the land.

We therefore wish to use this fine opportunity to remind our leaders of this useful quote by Khaled Hosseini who said:" When you tell a lie, you steal someone's right to the truth ". This is very profound.

However, if our Vice president still stands by his claim which we are certain in our minds is false, we respectfully call on him to publish the names of all the Senior High Schools connected to the free WiFi.

Ghanaians deserve to know in order for them to also do an independent verification of his claim and do rebuttal or praise the government if indeed his claim is true.

After all one of the tenets of democracy is transparency. We do not think this is too much a humble demand to make of our Veep and his staff.

We end our release by once again stating emphatically that the claim of government installing 80% of free WiFi in the secondary schools according to the Vice president is ridiculous and non-factual. Williams Shakespeare once said that " No legacy is so rich as honesty ".

Six die in accident at Hemang after car crashed into wrongly...
55 minutes ago