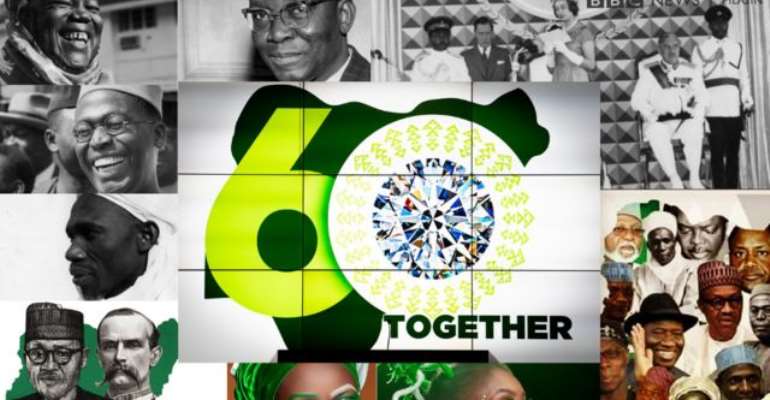 The President will light the candles on the nations cake and cut it (- probably imported from Harrods in London) and there will be a big bash at Aso Rock with past presidents, important dignitaries and foreign ambassadors invited. They will drink, make merry and pose for countless photo sessions.

But is there really anything to celebrate?

The country is in a worse state than it was 60 years ago when the Union Jack came down and Nigeria’s green and white flag went up: a Man doesn’t know where his next loaf of bread is going to come from or whether he’ll even live to see the next day; mass unemployment has created a generation of people who’ll never work for a living; the crime wave is spiralling out of control as is poverty and incessant killings; corruption has taken a front seat and with the current Covid-19 Pandemic nobody can see the fabled light at the end of the tunnel!.

If Nigeria were to be a person it would have nearly lived a full life by now having gone through childhood, puberty, adulthood, middle age and about to enter the blissful age of retirement. That is to say Nigeria should have got over its teething problems by puberty, settled into a staedy growth rhythm by adulthood and now at retirement should be a nation everybody should be happy to live in.

But alas, ‘Bad Boy’ Nigeria (- and its inhabitants) has refused to grow up and revels in its alter-ego of a ‘Man-Child’ still acting irresponsibly with no clear sense of direction. Haba! Na only you waka come?

In an attempt to govern ourselves we’ve tried every form of governance known to Man – without success- from military dictatorships to the US- Presidential Style we currently practice. We haven’t tried Socialism or Communism yet because it’s not in our DNA to call one another ‘comrade’, dress and eat like peasants and live in unpalatable hovels. It won’t work unless we adopt the Animal Farm maxim of “ All Animals are Equal but Some are More equal Than Others!”.

Nigeria is probably the only nation in the World that doesn’t have a national airline: Ethiopia we belittle has the best airline in Africa, flying modern aeroplanes that don’t fall out of the sky! What does it take to buy of lease a few planes, slap the national emblem on it and run an airline? In Nigeria that’s a Mission Impossible and recent attempts to revive the national airline have flat lined. That’s probably because they’re still bickering about who’s going to run it: is it going to be Mallam Muslim from the North or Christian Chief from the South? Or how much money they can ‘chop’ from the venture even before it takes off.

We have the largest deposits of crude oil in Africa yet our ancient and crumbling refineries ( - are any of them still working?) can’t pump out cheap petrol and kerosene for the populace to consume: to make matters worse fuel subsidies have been removed and a litre of petrol now costs a fortune. We have to import refined petroleum products – even from countries like Niger who only started commercial oil production in 2011.

Boko Haram and other insurgents are still busy terrorising the land killing and kidnapping hundreds of people at random and sacking villages while the Nigerian Army is powerless to bring their reign of terror to an end. Is it because they are cowering in their barracks or they have no guns to fight?

Still after sixty years building and maintaining simple basic structures such as roads and bridges is alien to our culture. We build them (-if we do!) and forget about them or “Who build that garda?”, as a past military leader once asked. It is the year 2020 and driving from Lagos to Abuja is like a daytrip to Hell! If the pot-holed roads or non-existent roads, rickety bridges and other reckless motorists don’t kill you, you are bound to meet your Waterloo at the hands of marauding robbers, kidnappers – or the police! (SARS are the guilty ones here!).

The minority ruling elite are well-heeled (- and corrupt!); well educated (- well most of them!) ; live in palatable mansions; drive the latest cars (- and may have a private plane or two!); send their kids abroad to proper schools; order cooked pizza from London while the rest of the country wallows in poverty and uncertainty. “Let them eat cake”, they tell the rest of the country – and mean it!

With nothing else to do many are jumping on planes to go abroad – many vowing never to come back home again. Abroad the pastures are greener, the opportunities are unlimited, proper healthcare, police you don’t have to bribe and the chance to live at least a decent life – something you can’t do in Naija (- unless you are ‘connected’) A nation is losing its top brains to institutions and organisations abroad and the government is doing nothing to stem the flow: there are no incentives to stay other than you’ll earn less than what a cleaner or nurse earns in the U.K (- that’s if you get paid at all!) and you’re not killed by ritualists or cultists or kidnapped by herdsmen! And those who don’t jump ship have to face the humiliating task of finding any kind of job. How many Ph.D. holders work for Dangote driving trucks?

Faced with hopelessness many are forgetting that “Get Rich quick or die trying” is meant to be lyrics in a rap song and not a mantra a great many Nigerians live and swear by: so kidnapping, armed robbery, embezzlement or sacrificing your granny or brother for a money ritual are not honest ways to make a fast buck.

So after 60 years of independence Nigeria has managed to wangle its way into the infamous club of failed nations, hardly something worth celebrating: it’ll be like a younger me coming home from school with ‘Fail’ on my report card and thinking my parents will throw a party to celebrate.

The 1992 constitution is a tool for stealing, rigging and pl...
26 minutes ago

[Video] I joined #FixTheCountry demo because my Church membe...
55 minutes ago