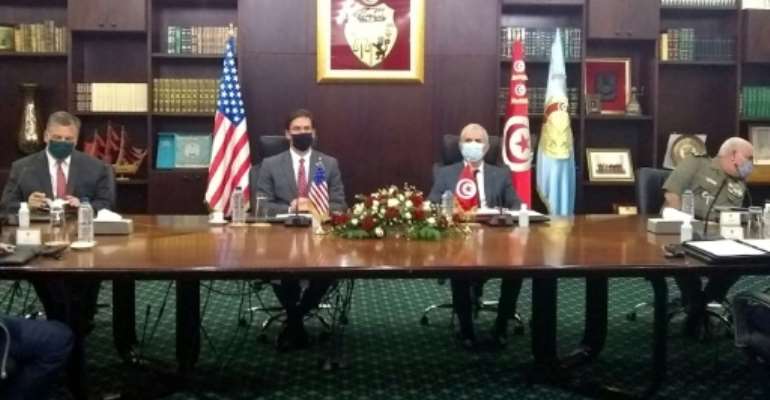 US Secretary of Defense Mark Esper, seated second from the left, meets with his Tunisian counterpart Ibrahim Bartagi, seated to his right, in the capital Tunis. By Sylvie LANTEAUME (AFP)

US Defense Secretary Mark Esper arrived Wednesday in Tunisia, his first stop on a North Africa tour where he was set to reaffirm US engagement in the Maghreb region.

As the raging conflict in neighbouring Libya has attracted foreign jihadists and world powers backing rival sides, Washington has increasingly cooperated with the Tunisian military, particularly on counter-terror operations.

Esper was set to meet President Kais Saied and Defence Minister Ibrahim Bartagi before delivering a speech at the North Africa American Cemetery in Carthage, where over 2,800 American soldiers were buried, most of them killed during World War II.

Since 2011, it has invested more than $1 billion in the Tunisian military, according to Washington's Africa command, Africom.

The US armed forces organised a military air display in March on the southern island of Djerba.

Tunisia in 2016 denied a Washington Post report that it had allowed the US to operate drones from its territory for missions in Libya against the Islamic State group.

But a court martial in 2017 in a case of sexual harassment by an American officer, reported in the US defence press, publicly confirmed the presence of an American squadron operating drones from within a Tunisian base in the northern region of Bizerte.

This May, the head of Africom said the US would send more troops to the country in light of the deteriorating situation in Libya, triggering an outcry in Tunisia.

Africom later clarified that it was only deploying "a small training unit" that would not engage in combat missions, and the Tunisian government said there were no plans for an American base in the country.

Esper, during his Tunisia visit, was due to warn of growing Russian and Chinese influence on the continent, according to a US official speaking before the trip.

The other goal of the visit was to reinforce ties and discuss the threat of jihadists such as the Islamic State group, the official said.

Esper was set to visit neighbouring Algeria on Thursday, becoming the first US defense secretary to do so since Donald Rumsfeld in 2006.

Esper will then head to Morocco, the other US Major Non-NATO Ally in the Maghreb region.