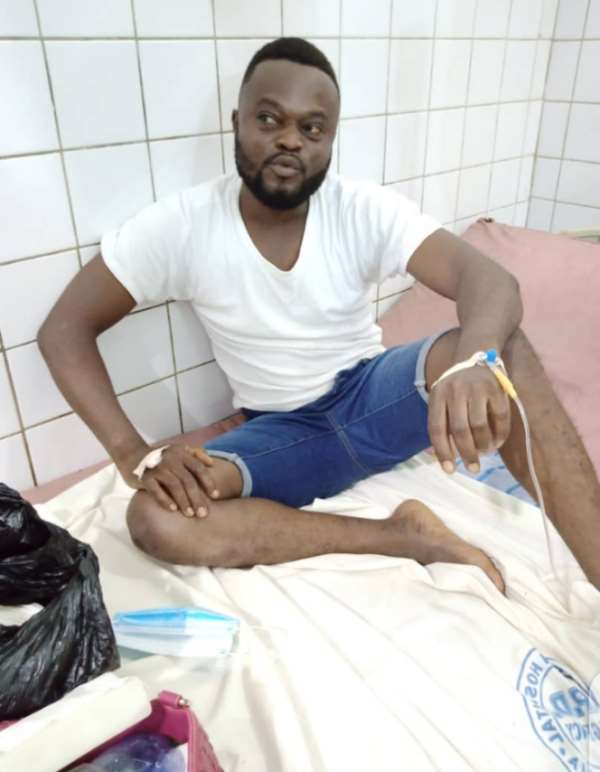 The Director for Youth Employment agency of the Asunafo North Constituency in the Ahafo Region, who doubles as NPP assistant secretary for the above Constituency, Patrick Ayemah popularly known as "Patoo" in the political landscape postulated firmly to the media.

Mr Patrick Ayemah involved in a lorry accident on Saturday. 26th September 2020. He attended some special programmes at Tepa in the Ashanti Region.

According to his narration, when he set off from Tepa to Goaso, while he was in charge of the steering wheel, after passing through Maban and some other Communities, the car with registration number, AO 194-15 totally somersaulted.

Mr Ayemah recounted how he suddenly lost control on the steering wheel and the car slipped off the road without stopping and started rolling. e felt into a dilemma because he was so helpless at that very moment.

He further explained that when his car started somersaulting, it swerved into the next lane, almost hitting another vehicle. Seeing that the car was about to smash into another vehicle in the far lane, he grabbed the steering wheel back and pulled it towards another side.

He ended up losing total control of the car. All of a sudden, he was off from the main road and on the grass, headed down completely while the Tyres were suspended in the air.

Mr Patrick Ayemah stated emphatically that the Almighty God safe him from this deadly accident and the seat belt also contributed a lot in his survival. He added that, when the car turned upside down, he was still wearing the seat belt which helped him in some way of reducing the magnitude of injuries.

The survived victim has called on all drivers and passengers to put on seat belts whenever they are travelling, irrespective of the distance because, an accident is unpredictable.

Patoo extended advise to the various road safety agencies to intensify education on the need to wear a seat belt.

He charged the media to also continue with their road safety Campaign. He expressed his recondite heartfelt appreciation to all friends and loved ones who have shown him, real love.