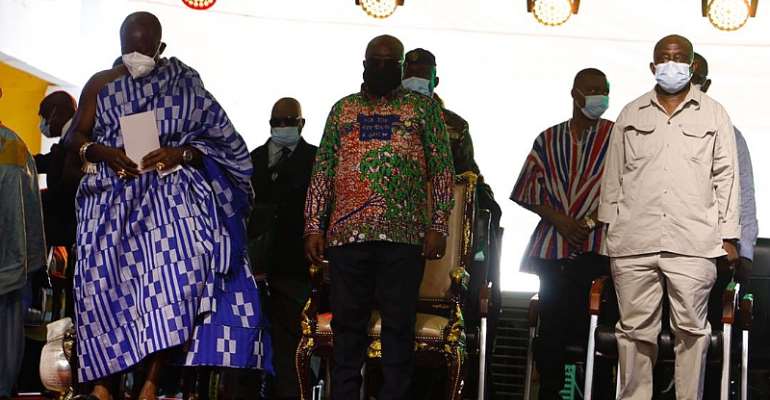 The $95m project which is located at Adagya in the Bosometwe Constituency in the Ashanti Region when completed will have the capacity of receiving 2400 tonnes of solid waste which is above the daily generation of 1200 tonnes of waste in Kumasi.

Nana Akufo Addo said the project is the largest in Africa and Ghana as a whole comprising of one cubic metric sold waste, restaurant, a clinic, cafeteria, lecture halls, administration block, a conference hall and other auxiliary facilities.

He said the project if completed will employ 800 directs and indirect jobs and help reduce unemployment in the country.

He said the government remains committed to partnering the Public Private Partnership in this case in the area of solid waste management and thanked the Hungarian government for patterning with Zoolion Ghana Limited.

He said the integrated plant has a 90% recovery rate, boost the economy and serve as tourism in the Kumasi metropolis.

The President task all MMDCEs to collaborate with the company in its operations and charged of the Sanitation Ministry to see to the completion of all the 16 projects across the country.

He calls on all Ghanaians to follow the safety protocols adding that the Coronavirus is not yet over but the numbers are quite encouraging.

He expresses gratitude to the Ashantihene, Otumfo Osei Tutu II for his support for the project.

The CEO of Jospong Group of Companies, Dr Joseph Siaw-Agyapong said the project if completed with receive 2400 tonnes of solid waste daily above the daily waste generated in Kumasi metropolis which is 1200.

He said the $95m project will create 800 direct and 1500 indirect jobs for the teeming youth adding that the projects were an Australian technology.

Mr Siaw Agyapong said research has shown that the Coronavirus can survive in plastic waste for five days, wood for four days, paper for four days and glass.

The Ashanti Regional Minister, said when the NPP government took over the helm of affairs, Kumasi was bedevilled with two major problems that were bad read network and sanitation issues.

But today one can attest to the fact that our governor has done well in terms of road construction.

The second problem which was sanction has also received a major boost through the commission of the Composit and Recycling Plant aimed at processing sold waste into plastic, fertilise and other produce for reuse.