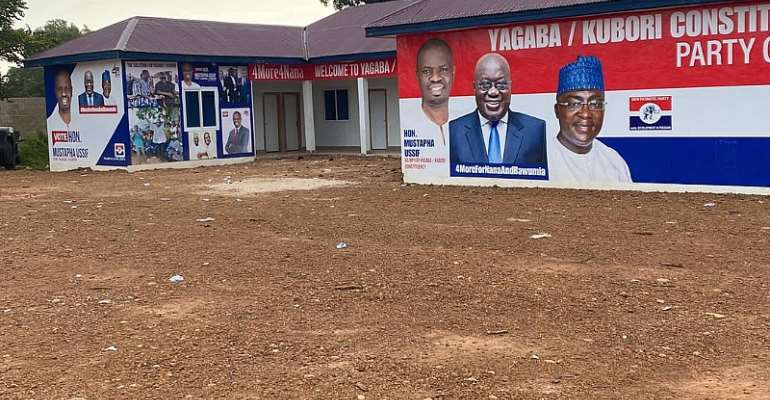 The Executive Director of the National Service Scheme and Parliamentary candidate for the Yagaba/Kubori Constituency of the North East region, Hon. Mustapha Ussif called on the Region to deliver all 6 constituencies to the NPP.

Speaking at the inauguration and handing over of a new party office constructed by him, he admonished party executives and supporters to vote massively for the New Patriotic Party come December 7 in appreciation for the significant developments in the region and also for the opportunity given them to have their own region.

He said, “for many years, the Mamprugu Kingdom has been pursing a region and this was only granted by this government. This I believe is a sign of good faith and prioritizing the need for Ghanaians. So nothing but an overwhelming endorsement on December 7 will only be a gesture of gratitude and appreciation.”

The National Youth Organizer, Henry Nana Boakye also admonished the campaign team to exhibit absolute dedication and commitment towards the work ahead and leave no stone unturned.

“I have worked with Mustapha Ussif as his deputy before I became a national executive. His desire to leave a mark is unmatched. He was able to transform National Service and revived all projects within a short time in office. He has what it takes to be a minister if voted as the MP in the next NPP government to be able to continue with the wonderful work his done so far. Give him the opportunity and you will never regret it.”

The delegation then paid a courtesy call on Yizei Rana, Naa Balingu Iddrisu Bukari of Yizeisi traditional council where Nana B was enskinned as the Naachina Saha Naa representing the Youth Chief of Luck. Naa Baliugu thanked the delegation for the visit and gave them his blessings for the mini-rally.

He also thanked the NPP government for the numerous interventions in the community such as the provision of water, the 3 classroom block, extension of the maternity wards, and a provision a public toilet for the community all within 3 and half years in power. “My people will be ungrateful if they don’t reward such a hardworking government for such projects.”

At the rally grounds, several speakers called on the crowd to do their possible best by supporting the campaign team and party executives in their various areas to spread the gospel of the government and Hon. Mustapha. They were admonished not to be complacent as every indication proves the seat would be won by the NSS boss.

A group of defectors were introduced to the crowd and officially ushered into the NPP party.

Hon. Mustapha won the seat for the 1st time for the NPP in 2012 and lost it in 2016 to his predecessor, Hon. Ibrahim Abdul Rauf Tanko, a loss which he largely attributed to his inability to match his predecessor’s resources as he was the Chairman of the HAJJ PILGRIMS AFFAIRS - Office of Ghana at that time.

Speaking to the media after the rally, he indicated that his constituents have now realized what has been lost and wasted. “They can now see the difference I made within my tenure as an MP compared to the 12 years of my opponent. The crowd here and everywhere we go is enough indication that my people want a change. A change for a better representative who would prioritize the welfare of the Constituency and not his personal benefit. My records as a 1 term MP far outweighs that of my opponent and that can never be disputed,” he added.

The ace northern entertainer, Sharifa Gunu also called on the crowd to vote for the Tuma’daana Hon. Mustapha before entertaining the crowd with series of hit songs including a track she specially made for Hon. Mustapha Ussif.