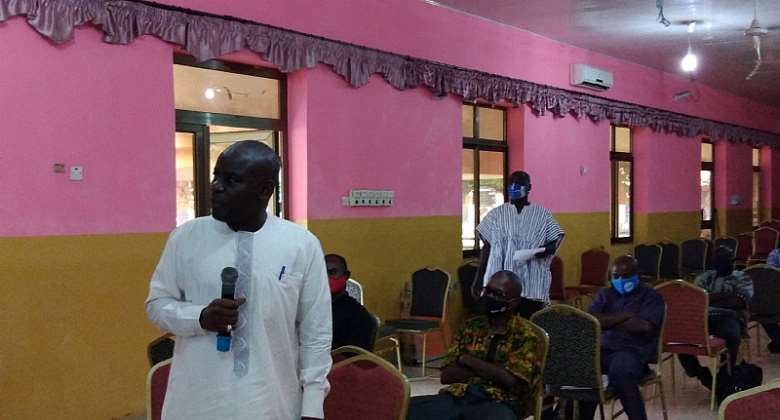 The project is dubbed "Strengthening Basic School Teacher Quality through Professional Learning, Communities and Coaching" with a total of 380 basic school teachers in 32 selected schools in the Northern and North East regions of Ghana expected to benefit from the project.

Some activities under the project include Inception Meeting, Sensitization of College Community, (SCC) sensitization of District, Municipal and Metro Education Directors and Heads of selected institutions, Capacity Building for Implementors among others which are geared towards improving the quality of teaching in the selected schools and building professional competencies for the beneficiaries

Addressing participants during an implementators meeting on Tuesday, Principal of the Tamale College of Education Dr Sulemana Iddrisu appealed to them to take the project serious as its outcome would determine the needs for other projects to be initiated by the College.

Dr. Iddrisu stated that the outbreak of the COVID-19 pandemic affected partly the implementation of the project, but was optimistic the project would still achieve its intended objectives.

"You will agree with me also that, if not for covid-19, the implementation of this project would have been done. Our anticipation was that by July and August the whole program would have been over. But as you know, man plans and God plans and God is the best planner. COVID striked and has changed the dianamics of the way we have been thinking. But thankfully for us, this whole thing was planned without COVID in mind but we were already preparing ourselves for eventualities like this. So for me, anyone of you who is here should count himself or herself lucky that at least we have learned some skills, we have been equipped with skills that can enable us deliver and deliver very well " he said

Speaking on the objectives and implementation of the project, Team member of the project and lecturer at the College, Dr. Osei Yaw indicated that the Project started in November 2019 and was to end in August 2020 as a pilot project but was interrupted by the COVID-19 pandemic

He said to achieve the objectives of the project, there was the need for them to develop the participants professionally so that in turn, the students will also benefit

The project consultant and Facilitator Dr Hanan Lassem Zakaria who spoke to the implementators Via Zoom from Demmark revealed that the Sub-Saharan African has the highest out of school for all ages with 21 percent of children have their rights denied to education with 63 percent of them resides in the rural communities.

He further said in West and Central Africa, less than 45 percent of children in grade six attained competences in Math and English

Adding that, in South Africa, the majority of Grade 4 students showing the capacity of grade one, which is opposite as found in the Western world

He indicated that goal four of the Sustainable Development Goals (SDG 4) requires sustainable, equitable, and inclusive education for all children which often is not the case in Africa.

Oh his part, the project contact - person Alhassan Hamza Said the PLCC model was adapted from the new National Curriculum

He added that the project intends to benefit in all, three hundred and eighty (380) in serving teachers and ten thousand and seventy-one (10,071).

He further indicated that the College has plans for more of such projects after the successful implementation of the PLCC model.